Guess who may be coming to Broadway?

While it can be a bit cringe-inducing to watch today, 1967's Guess Who's Coming to Dinner?, directed by Stanley Kramer, is an iconic 1960s "message" movie.

Even if you've never seen the movie, you probably know the plot, or at least 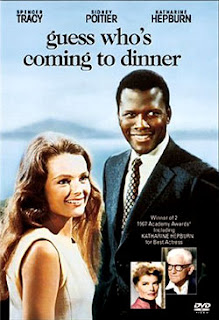 understand the meaning of the title. It's about an affluent couple, played by Spencer Tracy (in his final film role) and Katharine Hepburn, whose liberal values are tested when their daughter (Hepburn's niece, Katharine Houghton) brings home her African-American fiance, a brilliant doctor portrayed by Sidney Poitier.

I haven't read anything since last summer about plans for a stage version, to be directed by Kenny Leon. But this week, some casting rumors surfaced on FoxNews.com. According to Roger Friedman's story, Debra Winger and either Bill Pullman or Barry Bostwick are in line to play the Hepburn and Tracy roles, with Amanda Bynes as their daughter and Mekhi Phifer possibly stepping into Poitier's very big and legendary shoes. Of course, with Broadway shows falling by the wayside left and right, there's no guarantee that this will even happen.

Still, I hope it does. It's tempting to think of Guess Who's Coming to Dinner as hopelessly dated, a relic of its times. The movie was released right around the time of the landmark Supreme Court decision Loving v. Virginia that found laws barring interracial marriage were unconstitutional. Obviously, interracial marriage is much more common and accepted today.

The plot of the movie does strain credulity. It's easy to poke fun at Tracy and Hepburn's characters as upper-class white liberals who squirm uneasily when they finally have to practice what they preach. They have a very short time to decide whether they'll give this impending marriage their blessing.

And the way Poitier's character is written, he's so perfect that the only possible objection they could have is his race. (In truth, there's a very logical and understandable objection - the fact that their daughter only met him a short time ago, when she was on vacation in Hawaii!) Plus, Houghton's character seems a tad flightly. I mean, what does Poitier see in her!

But let me try to make a case for the continuing relevance of Guess Who's Coming to Dinner?

First, there are still, unfortunately, many families in which bringing home someone of a different race, religion, ethnic group - or the same gender - would not be greeted with open arms. One of the most poignant - and pointed - scenes in Passing Strange comes when Daniel Breaker's Youth realizes that his left-wing German friends aren't so eager to have him come meet mom and dad at Christmas.

What I appreciate about Guess Who's Coming to Dinner? is that there's no time for equivocation. This was the baby boomers demanding of their parents, tell us right now whether or not you believe in the American values of freedom and equality that we were taught in school, because we do believe in them.

And that tension - between what we say we believe in and what we actually do - is still relevant. It's very easy to say that we believe in freedom and equality and free speech, that we judge people by the content of their character. But there aren't many times in our lives when we're truly tested. As imperfect as it may be, Guess Who's Coming to Dinner? is about what happens when that occurs.
Posted by Esther at 3:24 PM

Amanda Bynes? Really? I'd jump at the chance to see Debra Winger and maybe even Barry Bostwick but, well, oh my.

I love Debra Winger. I cried at "Terms of Endearment" along with everyone else! But it's just so hard to picture other actors filling the shoes of Katharine Hepburn, Spencer Tracy and Sidney Poitier. Yeah, I agree about Amanda Bynes. I guess that move would be designed to bring in the kids. Not that there's anything wrong with that! ;-)

Sounds like an updated version of this movie needs to be written, because the message is still valid today, even if it's more likely to occur on other issues. I'm very proud to say that I've had many opportunities to practice what I preach and have had no problems doing so.

Well, there have been other versions that have turned the tables racially, like 2005's "Guess Who," with Ashton Kutcher and the late Bernie Mac. But it was obviously played more for laughs.

Some of the same issues are raised in a more serious and sensitive way in the 2006 movie "Something New," about a young African-American corporate lawyer who falls in love with a white landscaper. It's actually pretty good.

And just from reading your blogs, I know that you and your husband set a great example for your boys!