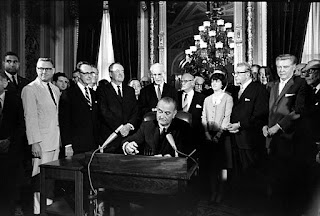 I'm on the couch, in front of the tv, my feet up on the coffee table, watching CNN, ready for the Democratic National Convention, live from Denver. It's going to be an exciting four days of political theatre.

Whatever your views, this is truly a historic week in American history. Consider that in 1961, the year Barack Obama was born, black Americans living across a large swath of the southern United States were not permitted to vote. Now, a major political party is preparing to nominate an African-American candidate for president. It's something that no one could ever have contemplated when Obama was born.

Sometimes it's easy to throw up your hands and feel that one person can't make a difference. But in the 1960s, ordinary Americans, surmounting fear and acting with tremendous courage - black and white, college students and housewives - put aside their own personal safety to secure civil rights for black Americans. In the process, some of them were jailed, beaten and even killed. They were not afraid and they helped make this country better - for all Americans.

It was the sight of peaceful marchers being attacked by the police while walking from from Selma to Montgomery, Alabama, that led to the passage of the Voting Rights Act of 1965. In a bit of incredible coincidence, ABC was showing Judgment at Nuremberg, a film about Nazi racism, that night in March 1965, and broke into the movie to broadcast the bloody images that horrified a nation.

A week after the violence, President Lyndon Johnson addressed a joint session of Congress and urged passage of the Voting Rights Act. (The picture is of Johnson signing the act into law, on Aug. 6, 1965.) It's a remarkable speech and a great example of using the office of the presidency as a bully pulpit. You can listen to the speech here.

In his speech, Johnson made the struggle for equal rights for black Americans a struggle for all Americans, invoking the words of the civil-rights anthem by saying, "We shall overcome." In the decades since the act was passed, the number of black elected officials has climbed from 300 to more than 9,100. Including, of course, the junior senator from Illinois.

If you want to read a compelling novel about the struggle, I recommend Freshwater Road, by Denise Nicholas. The protagonist is a young African-American woman from Michigan who ventures south during Freedom Summer, which brought hundreds of young, mostly white and Northern, volunteers to Mississippi in 1964 to try and register black voters.

Okay, enjoy the convention. I'm looking forward to Michelle Obama's speech tonight and an appearance by Sen. Edward Kennedy, who's undergoing treatment for a brain tumor. Obviously, that will be an incredibly emotional moment.

Update 9:38 p.m. Teddy just finished speaking. It was a poignant moment and he sounds like he's got plenty of fight left. His comment that "this November the torch will be passed again to a new generation of Americans" really got to me and I'm a little teary right now. Plus, he's absolutely right about health care for all Americans - it's a right, not a privilege. Here's a transcript of his speech.

Update 10:58 p.m. I thought Michelle Obama's speech was pretty good. It softened her, showed where she came from and served as a good introduction to her husband. She was passionate without sounding strident. She's not a forceful, stand-and-deliver type of speaker, her voice reaching a crescendo as she gets to an applause point. The fact that she seemed a bit nervous, that she didn't quite know what to do with her hands at times, was kind of endearing.

I think the part that will resonate with a lot of voters was at the end, when Barack Obama appeared by video hookup from Kansas City. Watching him interact with his wife and two young daughters was terrific. They seem like a close, loving family, people you'd want to have for your friends or neighbors. In a country where too many white people don't have friends or coworkers who are African-American, that may be the most important thing her speech accomplished. There'll be plenty of time for policy talk later. You can read her remarks here.
Posted by Esther at 6:11 PM

He does! What an inspriation. Still full of vigah! ;-)