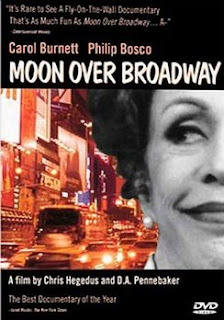 The 1997 documentary Moon Over Broadway, by husband-and-wife filmmakers D.A. Pennebaker and Chris Hegedus, chronicles a six-month journey to opening night of a farce called Moon Over Buffalo, the vehicle for Carol Burnett's return to the New York stage.

After watching it, I thought, this is not Mickey Rooney and Judy Garland rounding up up some of their pals to put on a show. First, there are millions of dollars involved. Second, there are egos involved. And third, let's face it, a paying audience can be a lot tougher to please than your pals in the neighborhood.

Pennebaker first gained fame for 1967's Don't Look Back, about Bob Dylan's British tour two years earlier, and he's made many films about music, theatre and politics, among other subjects. Moon over Broadway is a fascinating look at how a show comes together and it incorporates Pennebaker's signature style: handheld cameras, grainy appearance from filming in available light and, in cinema verite fashion, no narration.

The documentary opens with a curtain call, and then moves several months back to a March press conference announcing Moon Over Buffalo. It's the story, according to playwright Ken Ludwig, of a 1950s acting couple, George and Charlotte Hay, kind of second-rate Lunts. Hollywood director Frank Capra is coming to Buffalo because two stars of a movie he's about to film are injured, and he may use George and Charlotte as their replacements. They go beserk in their greed and ambition.

The couple are played by Burnett, making her first appearance on Broadway in 30 years, and veteran stage actor Philip Bosco. In addition to showing us rehearsals, costume fittings and backstage, Pennebaker's cameras eavesdrop on some pretty blunt conversations and frayed tempers. It's so interesting to be a fly on the wall. You really get a sense of the stress, the anxiety, the tension among everyone involved in putting on this show.

Apparently, some people were not too happy to have a big television star in the cast. At one point, Ludwig laments to producer Rocco Landesman that the play will never be performed as he wrote it, which I guess is a pretty common complaint among playwrights. "This is the pact you make with the devil in the modern theatre: you need a star to sell tickets."

On the commentary, Bosco says he was worried about working with Burnett, fearing that her presence would change the dimension of the show. "I didn't like the play to begin with. I thought it was poorly written. but the role was great, I thought, it was a leading role on Broadway and you don't turn leading roles on Broadway down very easily." (I recommend listening to the commentary, which was obviously recorded years later for the dvd).

But I have to say, I was really impressed watching Burnett at rehearsal. I didn't notice any "I'm a big tv star" behavior. She seemed nervous but very dedicated, working hard to learn her lines and get the character down, listening to notes from director Tom Moore. It was interesting to see how an actor and director and writer work together to shape a performance.

By August, the show is ready for its out-of-town tryout, at Boston's Colonial Theatre.

Things are a lot different once the show gets before a paying audience. The tension is definitely racheted up a few notches. There's fine-tuning and rewriting and a lot of details that never even occurred to me, like questions about whether the dressers are able to work fast enough to help the actors change costumes between scenes.

The reviews in Boston end up being mixed, and there's lots of discussion among the creative team about what got laughs and which sections of the theatre seemed to be laughing the most. They discuss hiring a joke writer to punch up the dialog. "Audience will forgive all sorts of structural stuff, a lack of characterization, the story not making sense," Landesman says. "They won't forgive it not being funny."

A crisis occurs during the first preview when a winch jams, temporarily stopping the show. You see five sets of hands working furiously backstage, alternating with Burnett, who comes out to talk to the audience. She tells stories, answers questions, just like she'd do on her variety show. What a trouper! The audience is roaring. It was very funny, probably funnier than anything in the play, and one of those only-in-live-theatre moments.

Moon Over Buffalo opened on Oct. 1, 1995. As in Boston, the reviews were mixed. The New York Times' Vincent Canby doesn't like the play very much but he has very kind words for Burnett and Bosco. They both received Tony nominations, and the show played a total of 309 performances, closing on June 30, 1996. (In the end, we learn that of the 21 non-musical plays that opened, only three others finished the season.)

As he gets ready for opening night, putting on his lucky cowboy boots, Landesman sums things up nicely: "It wouldn't be any fun if you couldn't fail totally and be humiliated and embarrassed. It's that possibility, that risk of total mortification and degradation, that you're always trying to escape from, and what a joy when you do."
Posted by Esther at 12:28 AM

This was one stage show I still kick myself for not having seen. If Carol Burnett were ever to come back to the stage, I'd move mountains to try and see her.

You forgot to mention that Bernadette and her late husband are in the audience and Carol calls her out...then they go backstage for a visit. Bernadette guested on more than one incarnation of Carol's tv show and of course, they were both in "Annie."

Steve,
You should definitely watch this documentary. I think you'd enjoy it. You'll get a great sense of what "Moon Over Buffalo" was like. There's quite a bit of footage from the play. I came away from it so impressed with Carol Burnett's dedication. And of course, I remember watching and loving "The Carol Burnett Show" growing up. I'd love to see her on stage, too!

Sorry for the omission, Sarah! Thanks for adding that information.