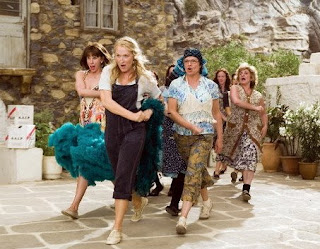 A Mamma Mia! sing-along is coming to select theatres nationwide on Aug. 29. According to the Playbill article: The sing-along edition of the film will feature the lyrics to every musical number on the screen.

I know this type of thing has been done before with other movies, but I'm not usually interested in audience participation. I mean, the actors are getting paid plenty. Let them do all the work. My job is to sit back and enjoy. Plus, I just can't see myself going to a movie dressed up as a character from The Rocky Horror Picture Show or The Sound of Music. I'd rather be in my own clothes, thank-you very much.

I do remember going to a showing of Casablanca once where people in the audience would shout out the dialog along with Humphrey Bogart. (It was usually part of a double feature with Play It Again Sam, a line that, of course, we all know Bogart never uttered). Casablanca is my favorite movie of all time, so it was awesome. My second-favorite movie is The Graduate, and it would probably work just as well for that.

Anyway, I totally want to do this. Only it would have to be in a very packed movie theatre where my voice would be obscured in the crowd, because I can't sing. Not a note. In fact, I think I'm probably tone deaf. But it sure sounds like fun. No word on whether we'll be able to get out of our seats and dance, but I would be up for that, too!

Another one to mark on my movie calendar: From Sept. 24-28, the stage version of Rent will be broadcast at theatres nationwide. The Aug. 20 performance at Broadway's Nederlander Theatre is being filmed, along with the musical's final performance, on Sept. 7. You can sign up at The Hot Ticket to be notified when more information becomes available.

Rent, which opened on April 29, 1996, is closing on Broadway after more than 5,000 performances. I'd only seen the movie, but in January, I had a chance to see the show on tour.

Despite the passage of 12 years, and the advances made in treating HIV and AIDS, the poignant stories of people falling in love and struggling with illness give Rent a timeless quality. I found it very life-affirming and I'm glad I had a chance to see it on stage. And I'm glad the live-on-stage version is being preserved on film.
Posted by Esther at 7:05 PM

They are already selling tickets to Rent here in Canada but its $23...! WHAT? I only paid $20 to see it live on stage.

I'm still debating. LOVE the show but if i'm going to pay that much, I might as well see it live again... for the 12th time.

Wow, I didn't realize it would be that expensive! Silly me, I figured it would be the price of a regular movie ticket. I'll still go see it, though. I won't have a chance to see "Rent" on Broadway, so this is as close as I'll get.

Who knows. Maybe that's just Canadian pricing... We tend to pay a bit more than Americans anyways on EVERYTHING (grumble grumble)

No, I'm sure the U.S. prices will be just as high. This is a limited-run event, and I'm sure Sony, which owns Hot Ticket, will milk it for all it's worth!