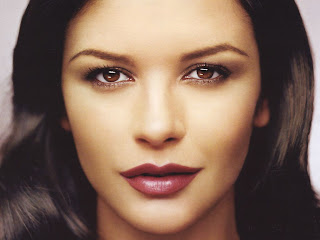 Ever since seeing her on Broadway in A Little Night Music I cannot get enough of the lovely Catherine Zeta-Jones. So I was catching up with her appearance on The View Friday and she mentioned three interesting things:

Someday she'd love to play Madame Armfeldt in A Little Night Music, the mother of her character, Desiree, portrayed in the current revival by Angela Lansbury.

She's acquired the rights to Geraldine Brooks' People of the Book and plans to produce and star in a television movie based on the novel.

Then she mentioned an upcoming project that sounded so bizarre I thought she must be joking. But a little Googling revealed that she was serious!

Stephen Soderbergh, who directed Zeta-Jones in Traffic, wants her to star in a 3-D live-action rock 'n' roll musical about Cleopatra. (Will I have to wear my 3-D glasses for the entire movie or just in certain scenes?)

According to this 2008 article in Variety, the music has been written by the 1990s indie rock band Guided by Voices, with a script by James Greer, an author and former bass player for the band.

The imdb page has a release date of 2011 for Cleo, and describes it as a "1920s-set, song-and-dance retelling of the story of Cleopatra, Antony and Caesar. The cast lists Zeta-Jones as Cleo and Ray Winstone as Julius Caesar. (At one point, Hugh Jackman was going to play Marc Antony, but he's dropped out.)

I'm really not that big on ancient Egypt but the 1920s setting makes this sound kind of interesting. Although I don't know why it would have a rock 'n' roll score in the 1920s, or require 3-D for that matter.

Of course Zeta-Jones' last movie musical, Chicago, was also set in that decade and won her an Oscar. (Maybe they could use the same poster!)

In a January 2009 interview with Esquire, Soderbergh explained his attraction to the project:

"I want it to be like an Elvis musical. Fun, not serious. I've always wanted to make a musical, and I've been frustrated by all the recent musicals. I miss the technical proficiency of the long takes of the camera, where you're not disguising the inability of the performers to sing and dance. I miss that. And if there were ever a genre to be ready-made for 3-D, it's the musical."
Posted by Esther at 12:30 AM