The unfinished business of equality 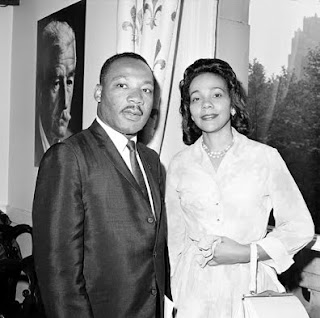 I've mentioned before that when I was in high school, I had the honor of briefly meeting Coretta Scott King. It's an experience that I will never forget.

Mrs. King, who passed away in 2006, spoke eloquently on more than one occasion on the connection between the fight for equal rights for African-Americans and for gay and lesbian Americans. Her words are truly inspiring.

“I still hear people say that I should not be talking about the rights of lesbian and gay people.... But I hasten to remind them that Martin Luther King Jr. said, 'Injustice anywhere is a threat to justice everywhere.' ''

Today we honor the life and legacy of her husband, the Rev. Martin Luther King Jr. While it's important to remember what Dr. King and the civil-rights movement accomplished - making this country a more just and fair place - we can't forget the unfinished business of equality.

This year, Martin Luther King Day falls in the midst of a trial in federal court in California challenging Proposition 8 - the voter initiative that banned same-sex marriage.

The legal team is headed by Republican Theodore Olson, former solicitor general under President George W. Bush, and David Bois, a Democratic trial lawyer who was his adversary in Bush v. Gore.

Some people have questioned whether this is the best time to bring such a case forward, potentially to the Supreme Court. But in Newsweek, Olson makes a compelling, sincere and conservative argument in favor of same-sex marriage.

Like Mrs. King, his words are eloquent and worth repeating.

"When we refuse to accord this status to gays and lesbians, we discourage them from forming the same relationships we encourage for others. And we are also telling them, those who love them, and society as a whole that their relationships are less worthy, less legitimate, less permanent, and less valued. We demean their relationships and we demean them as individuals. I cannot imagine how we benefit as a society by doing so."

Maureen Dowd wrote in The New York Times on Sunday, "legalizing gay marriage is like electing a black president. Before you do it, it seems inconceivable. Once it’s done, you can’t remember what all the fuss was about."

We know who was on the right side of history in the civil-rights movement: the people who fought to end segregation, to allow African-Americans to vote, to bring down the ban on interracial marriage.

If he had lived, Dr. King would be 81 years old. No doubt he would still be marching, still be speaking out. And I have no doubt which side he would be on in the struggle for marriage equality: the side of justice for his fellow Americans who happen to be gay or lesbian.
Posted by Esther at 9:30 AM

Esther, I just finished reading Ted Olson's piece in Newsweek. It was amazing, and his arguments so obviously sound and rooted in fairness. And how cool that you got to meet Coretta Scott King! It saddens me that so many African-American leaders distance themselves from the fight for equality for gays and lesbians.

Thanks for the comment, Kathy. I know a lot of people questioned Ted Olson's motives but he seems sincere. Margaret Talbot's piece in the New Yorker, which I also linked to, is very good. It's an overview of the Prop. 8 trial.

The situation with African-Americans is complex. But there's no doubt where Coretta King stood and I think she more than anyone would know where her husband would have stood.