A creative look at Memphis 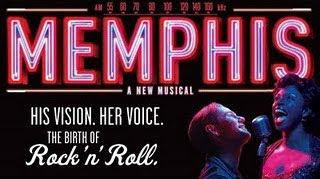 I got an e-mail today from a marketing representative for the Broadway musical Memphis about videos made by the creative team and posted on YouTube.

I saw Memphis in December and really enjoyed it, so I'm happy to pass the message along.

The musical is set in Memphis during the late 1950s and early 1960s, at the dawn of rock 'n' roll. It features terrific performances from Chad Kimball as a white disc jockey and Montego Glover as a talented black singer who wins his heart. The story is a powerful reminder of a time when their romance was scorned and getting married in their home state would have been illegal.

Here's the interview with Tazewell. He did such a great job telling the audience about Kimball's Huey and Glover's Felicia through their clothes, and I liked learning a little bit about the creative process from his end.

Memphis took a long and winding six-year journey to get to Broadway, as recounted in this New York Times article. In a month when so many Broadway shows are closing, it's nice to recognize a survivor.
Posted by Esther at 3:00 PM