A fond farewell to Finian's Rainbow 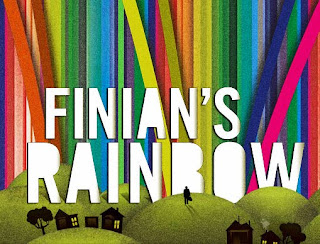 Another Sunday in January and sadly, the curtain falls on another Broadway show. It's time to say goodbye to the musical revival of Finian's Rainbow, which closes today after 92 performances at the St. James Theatre.

I really thought this one might have a chance.

I had qualms going in about the silliness of the plot - but I ended up being charmed. And it got generally good reviews - in The New York Times, Charles Isherwood called the production "joyous."

True, there were no "stars" to draw the tourists and it's not a classic with the name recognition of say, West Side Story.

But Finian's Rainbow seemed to do the right things to build an audience, including having a very active Twitter and Facebook presence. Also, I thought it had the potential to be a good family show - a love story for adults, magic for the kids.

Just shows how much I know! Guess I'd better stay out of Broadway producing.

There were some terrific performances in Finian's Rainbow. I thought Kate Baldwin was lovely as the feisty Irish lass Sharon McLonergan, especially when she sang "How Are Things in Glocca Morra?" And Christopher Fitzgerald was a very funny leprechaun. I hope the Tony nominators remember them.

This was a musical that debuted on Broadway in 1947, when its theme of racial harmony was considered daring. Just having black and white dancers on stage together was controversial. Thankfully, times have changed. And I guess the time for Finian's Rainbow has passed.

There simply was not enough of an audience. With 20-20 hindsight, that's pretty easy to see - a somewhat obscure 63-year-old musical with no stars is going to have trouble, no matter how glowing the reviews. There just isn't enough of a built-in fan base. At least there's a cast recording.

Maybe we're moving to an era of limited-run musicals just like we do for plays.
Posted by Esther at 9:00 AM

I am really glad I got to see this before it closed. I was also thinking as I watched this show what a great family show it is, but I guess if it doesn't have a brand like Disney behind it, many families from out of town won't know about it. Your post also made me think about Facebook/Twitter, which many shows are doing, and I think the problem with this is that it caters to the fans more than creates new fans, but I could be wrong.

Yeah, I think you bring up some good points.

Parents - and kids - want to see shows from Disney or Shrek because they've seen the movies, they know the brands. I'm actually kind of surprised Shrek didn't last longer, for that reason.

I thought Finian's Rainbow might pick up some business with families from the tri-state area but that was probably unrealistic. I mean, not many people open up the paper anymore and say, "which Broadway show should we take the kids to see this week?"

And you're probably right about Facebook/Twitter just attracting people who are already fans.

Sigh. It's so hard out there for a show.