I have to give credit to James Spader, who's making his Broadway debut in David Mamet's play Race, for something he wrote in his Playbill biography: 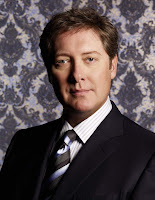 "After working in film and television for more than 30 years, it is one of the greatest honors and pleasures of Mr. Spader's career to be back in the theatre performing this play, with these players, on this stage, for you tonight."

Even though I was disappointed with the play I love Spader from Boston Legal and it was great to see him on stage.

Since celebrities are all the rage on Broadway these days, I'm hoping some other actors who've been concentrating on movies and TV will follow his example.

For instance, after the Golden Globes on Sunday night, Meryl Streep told the press that she's ready to return to Broadway. 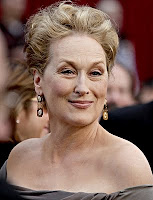 "I don't have a plan for that, but I would like to. I always said when my children grew up and went to college, I could think about that. And, that happened this year, so I'm looking."

Of course America's greatest living actress is high on my list of people I'd love to see treading the boards. Streep last appeared on Broadway in 1977, in the short-lived Kurt Weill, Bertolt Brecht musical Happy End.

(Although she did return to New York to great acclaim in Mother Courage and Her Children in Central Park in 2006. I definitely would have waited in line for a chance to see that!)

If Meryl's looking to return, I'm guessing some producer somewhere is thinking up a project for her at this moment. (It would be icing on the cake if she could bring former costars Anne Hathaway and Amy Adams with her.)

It's always cool to know that someone who's moved on to movies or TV got their start on Broadway.

Sometimes they come back, like Emmy winner Kristin Chenoweth who's starring in Promises, Promises, and sometimes, sadly, they don't, like comedian Ben Stiller, who made his first and thus far only Broadway appearance in 1986.

There's another performer who's definitely overdue for a return.

With the final season of the ABC series Lost beginning next month, I'm hoping Michael Emerson will make his way back to Broadway.

In the right role I think Emerson, who plays the creepy Benjamin Linus on Lost, would be a big draw.

Perhaps there's a play they could all do together?
Posted by Esther at 12:30 PM

Hey Esther, it's Nicole from the Drama, Daily blog...I'm trying to update the list I started compiling of women theatre bloggers... do you mind disclosing your last name and location for the list? You can leave a comment at my blog or email me at nstodard@mail.usf.edu

Hey Esther, it's Nicole from the Drama, Daily blog...I'm trying to update the list I started compiling of women theatre bloggers... do you mind disclosing your last name and location for the list? You can leave a comment at my blog or email me at nstodard@mail.usf.edu

The first time I saw RACE I too was impressed by this comment in James Spader's bio. Unlike you though I really like this Mamet play; I would, though, like to see it recast, save for Mr. Spader and Mr. Grier, both of whom were excellent...particularly James Spader (WOW)! It totally amazed me that he had been away from the theatre for over 25 years...he really is a born theatre actor!

Hi Nicole, thanks for including me on your list. It's a great project. I've e-mailed you privately.

Thanks for the comment, Anonymous. I know the play has a lot of fans and it would be pretty boring if we all agreed on everything!

But I do agree - it is amazing that James Spader has been away from theatre for 25 years. You'd never have known it. I just wish Mamet had given him a more fully developed character and story to work with. And next time, I'd like to see him tackle a non-lawyer role!

Anyway, I hope some other actors whom I've enjoyed will follow his example.

The upcoming season is certainly star studded. I'd like to see A Behanding in Spokane. I love Martin McDonagh's work. In fact, I'd like to just move to NYC, see everything and then go back to normal life.

Hey Dale, so nice to hear from you! Definitely brightens my Sunday morning.

Yeah, I'd love to move to New York for a month and see everything. Sigh. And there's so much off Broadway that I never get to see.

Hope you make it for James Spader. I'm on the fence about Martin McDonagh. His plays tend to be gory and I'm very squeamish. Maybe I'll wait for the first reports.

And Mery Streep would be amazing. Like I said, I'm sure after she made that comment at least a couple of producers are thinking up projects for her!