Sometimes simply filming a musical onstage doesn't really grab me. But in the case of Passing Strange, I think Spike Lee has done a great job capturing what I enjoyed about this show when I saw it on Broadway in 2008 and made me see it in a fresh way. 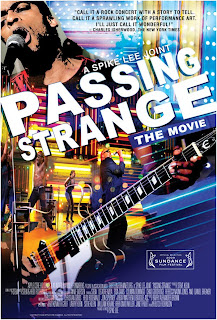 Passing Strange tells the story of a young black man whose journey of self-discovery takes him from his middle class Los Angeles home to the drugs and sex and radical politics of Amsterdam and Berlin. It's more or less the life of rock musician Stew, who fronts the onstage band and narrates.

I loved the performance by Daniel Breaker as Youth, an aspiring musician and Stew's younger version of himself. (Just to drive the point home, they both wear red T-shirts and sneakers!)

Breaker, who received a Tony nomination, is exciting to watch. He's a wonderfully expressive actor and being able to see him up close - the look on his face and in his eyes - just demonstrates that even more.

Also, Passing Strange is really funny. I'd forgotten how much I laughed.

Stew won a Tony for his book and also wrote the lyrics. (The music was composed with his longtime collaborator Heidi Rodewald.) He has some very witty and perceptive things to say about race and politics, as well as about family and being true to yourself as an artist.

This is a musical with quite a few intimate scenes between Youth and the people in his life - including his strict but loving churchgoing mother, played by Eisa Davis. Maybe it was watching them on a small screen but those moments seemed even more poignant this time.

Four actors: Chad Goodridge, Colman Domingo, Rebecca Naomi Jones and De'Adre Aziza, move seamlessly from the teenage Youth's friends in L.A. to Dutch artists to German anarchists. I especially loved Domingo as Franklin, the minister's son and choir director who sets Youth out on a path about which he himself can only dream.

I know Stew has mentioned The Wizard of Oz as an inspiration and I can see that. Youth's adventures reminded me so much of the mix of apprehension and exhilaration that comes from being in a foreign country for the first time.

The only thing that bothered me about the filming of Passing Strange, and I don't know whether this had something to do with the camerawork or my PBS station, but a few times actors on the left side of the stage were cut off, so you could only see half of their bodies. I noticed the credits were the same way.

When I wrote my review, I said that while I admired the show's innovation I missed the elaborate sets and big, choreographed dance numbers that you usually find in a Broadway musical. (Also, while I enjoyed the vibrant mix of rock and punk and gospel, among other sounds, I have to admit it was a bit loud for me at times.)

But the second time around, that really didn't matter. There's something I like even better than big sets and dance numbers - a well-told story. And Stew is a masterful storyteller. I'm so glad we have Passing Strange preserved on film.
Posted by Esther at 3:00 PM

You know, I never saw "Passing Strange" when it was on Broadway. I didn't really know what it was about, and the only clips I saw were of some big guy I'd never heard of before wearing a porkpie hat and yellow sunglasses. So I skipped it. But we watched it on PBS this weekend, and I really enjoyed it and I'm sorry I missed it on Broadway. It makes me wonder if I should stretch my theater comfort zone a bit.

I'm generally open to seeing just about anything - as long as I don't think I'll be insulted and it's not too gory.

When I first saw Passing Strange, I wasn't quite sure how I felt other than it was different! And loud! But watching it on TV really did bring out the things I liked about it. In a lot of ways, it's a very traditional coming of age story.

But I know what you mean about stretching your comfort zone. When I get a chance to go to New York, I always want to see what's new on Broadway.

And then I read about all sorts of interesting sounding plays off Broadway I wish I'd seen. And every year, there are a few Broadway shows I could have skipped.

If I lived in New York, I'd buy the cheap tickets and see everything!