The Norman Conquests on television 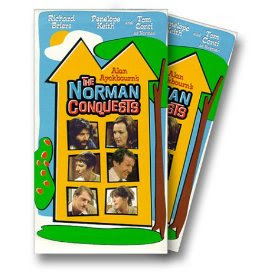 Nothing brings home the power of theatre like seeing the same play on stage and on television.

Since I loved The Norman Conquests on Broadway I figured I could re-live the experience by watching another version of Alan Ayckbourn's trilogy on the small screen with a different cast. Wrong!

I'm in the middle of the 1978 British television production. (I got the VHS tapes from the library - used copies start at $195 on Amazon.)

Wow, what a difference! These three plays that cover one weekend at a house in the country were so much better live.

Part of it is the quality. The picture on the tapes isn't exactly the sharpest. Plus, I'm watching them at home, so it's easier to get distracted.

And the six-person cast of the Broadway revival was so perfect. I really don't think anyone in this production can compare.

As Norman, Tom Conti is more low-key and annoying, whereas on stage, Stephen Mangan was endearing and a bit manic. I've liked Conti in other roles but as Norman, Mangan gave one of the best performances I've ever seen.

I realize there's a big difference between film/tv and stage acting and you can't really compare them. But there's something thrilling about having the actors right there in front of you.

And on Broadway, director Matthew Warchus ramped things up. The dialogue seemed sharper, the action more hilarious. Whereas on television, it's kind of bland and slow and not all that funny or vibrant.

Most importantly, theatre is a communal activity.

Watching the plays on television makes me realize how much my enjoyment comes from simply being in a room with hundreds of other people, joining in their gasps and laughter and exhilaration.
Posted by Esther at 11:45 PM

I really want to see this, just for comparison sakes. I definitely saw a youtube clip, and the Sarah reminded me of a transvestite. That was odd...

It's so different watching on tv. The Broadway cast was incredible. It was sharper, funnier, more physical on stage. There's just nothing as thrilling as a live performance.

I would definitely see if you can get the tapes through interlibrary loan. And I would invite 600 friends over to watch it, just so you can get that communal feeling.

SEE. I knew I couldn't be THAT crazy.

Wish I'd seen that more than just closing day. I really do.

I don't even have a library card, but I think I can get one from the nearby town, as long as it's still in my county...

Well this is the perfect time to get a library card! And I'm sure your friendly neighborhood librarian will be more than happy to help. There must be SOME library in Texas that has them. Honestly, I would not spend $195 to get a used copy from Amazon.

Yeah, I wish I'd seen it more than once, too. If only I lived in New York. You know how much I miss Norman. :-(