Billy Elliot has plenty of scenery to chew 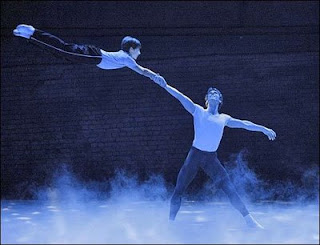 Interesting article in The New York Times this morning about Broadway productions eschewing lavish sets to save money. But in my opinion, one of the examples that Patrick Healy uses is a little misleading.

Healy mentions the "spartan kitchen" in Billy Elliot, designed by Ian MacNeil. He says the Tony-winning musical "which recouped its $18 million capitalization in 14 months, takes place largely in a community center dance hall, and some of the most critically praised dance scenes involve no more than a chair or an empty stage."

Well it's true that at one point, Billy does use a chair as a prop. But that's hardly all that's happening on stage. For example, the rigging that allows him to "fly" with the aid of an adult male dancer must be pretty complex and expensive.

And the "spartan kitchen" that Healy mentions is built around a mechanical set that's raised and lowered from the Imperial Theatre stage. I believe it required blasting through the floor of the theatre to install, which could not have been cheap. (Unfortunately, I couldn't find a picture.)

Now I'm the first one to admit that I like scenery that gives me something on which to chew. James Schuette's rundown shop in Superior Donuts and John Lee Beatty's opulent Manhattan apartment for The Royal Family were terrific. I also liked David Gallo's basement nightclub in the musical Memphis.

But the scenery isn't always what leaves a lasting impression. Really, it depends on the show.

Healy mentions that the set design by Scott Pask for the current Broadway revival of Hair is somewhat sparse. Between listening to music that I love and watching the hippies run around the theatre interacting with the audience, I hardly thought about the set. Or lack thereof.
Posted by Esther at 12:15 PM

A few days ago, one of my professors at school (where I'm studying theatre design) said:

"The glory of design is when you get it so right that nobody notices."

I think that statement is a good summation of the goal of a designer. Whether a set is technically lavish or spartan is not the point - the ultimate goal is to serve the text. For some productions that might mean a single chair on stage, and for others that might mean complex, intricate scene changes with lots of props and pieces.

Look at David Cromer's Our Town for instance. There's a play that everybody had insisted for years could only be done properly with a few tables and chairs. But in that key moment in Act Three when the Stage Manager pulls away the curtain and reveals the world that Emily didn't experience, we are able to identify with it much more deeply because of the scenery of that moment. It doesn't distract from the text; it enhances and serves it.

I think the debate over big or small is quite silly. The real argument: does the scenery serve the play, or distract from it?

Thanks so much for the comment Chris! You've given me some things to think about.

I think in the examples I mentioned, Superior Donuts and The Royal Family, the set design did take me into the world inhabited by the characters in those plays.

But it doesn't always have to be so detailed and intricate. I loved A Little Night Music despite the fact that the sets are kind of spare. For me, they were just enough to take me to another time and place.

I have to agree with you about the set design of Billy Elliot. I thought it was wonderful and very effective. I absolutely loved that show. And I really like what Chris has said about not noticing the design when you get it right. I think there is lot of truth in that.

Hey Pam,
Thanks for the comment. Yeah, I thought the Billy Elliot set was very effective and like I said, maybe not the best example of "cutting costs" in the scenic design! I think the set should just feel like it belongs to the show, not overwhelm it.