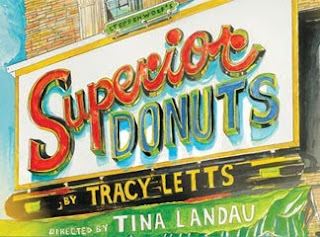 I wish I could be in New York this afternoon for the final performance of Tracy Letts' Superior Donuts. The play, which opened Oct. 1 at Broadway's Music Box Theatre, is closing after 108 performances. It's one of my favorites and it deserved a longer run.

Theatergoing is a communal experience but whether or not a play grabs you is such a personal thing. When I think about all of the plays I've seen over the past three years what it comes down to is this: Don't lecture, tell me a story. And if you can surprise me, that's a plus.

Superior Donuts, the story of a rundown donut shop in a changing Chicago neighborhood, did both of those things for me. I laughed, I got choked up and there was a moment when I truly gasped. Most of all, I was entertained.

I thought Michael McKean as the worn-out shop owner and Jon Michael Hill as the eager young man who comes to work for him had terrific chemistry. They were so much fun to watch together and Hill especially was amazing in his Broadway debut.

Last year, some of the performances I enjoyed on Broadway in November were overlooked by the Tony nominators. So I hope they remember McKean and Hill when spring rolls around. (And James Schuette's set design also deserves a nomination. It was so detailed, down to the gum stuck underneath the tables.)

The cast is made up of mainly Chicago-based actors, all of whom transferred with the play from its premiere at the Steppenwolf Theatre Company. In addition to McKean and Hill, they are Jane Alderman, Kate Buddeke, Cliff Chamberlain, Michael Garvey, Robert Maffia, James Vincent Meredith and Yasen Peyankov. I hope I get to see them on stage again.

It's a shame that there isn't room on Broadway for a play like Superior Donuts, a slice of life that's well-acted, with witty dialogue, memorable characters and a story that draws you in. This was a play of sweet, small moments, poignancy and humor from a terrific ensemble.

It's so different from Letts' previous work, the Tony and Pulitzer-winning August: Osage County, an acerbic, multigenerational family story. I love them both and I love the fact that they're so different.

(Although they share Letts' memorable characters and sharp dialogue and like August: Osage County, I think Superior Donuts would make a great movie. Spike Lee would be the perfect director for this gritty urban story.)

In an interview with the American Theatre Wing's Downstage Center program, Letts noted that Superior Donuts was his first play set in his adopted hometown of Chicago. While he didn't start out to write a work that would be smaller in scope, he does like to stretch himself.

"I have an impulse to mix it up. When I finish one thing, the next thing I work on I want to be different. I want to challenge myself in different ways. I want to explore different things, whether it's writing or acting."

I'm so glad Letts did challenge himself and I'm looking forward to his next play.
Posted by Esther at 10:00 AM