How about a real theatre hall of fame? 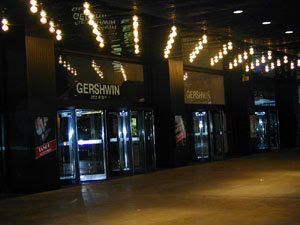 The Theatre Hall of Fame is holding its annual induction ceremony tonight in the rotunda of Broadway's Gershwin Theatre. It's a fitting location since the Gershwin is home to Wicked and the show's composer, Stephen Schwartz, is among those being honored.

But my first thoughts when I saw that story were, "Where is the Theatre Hall of Fame and can I visit?" Then I vaguely remembered reading names of inductees on the wall at the Gershwin when I saw Wicked on Broadway last month.

So I guess that's it. But shouldn't there be something more to recognize the long and storied history of Broadway?

Personally, I think it would be great if there were more theatre-related things to do in Times Square besides see a show, climb the red steps to the top of the TKTS booth or browse in a few souvenir shops.

We already know the oft-quoted statistic that 63 percent of Broadway tickets are sold to tourists, a good percentage of whom will probably find themselves in and around Times Square with some time to spare.

Other than Wicked's Behind the Emerald Curtain, there isn't much that's theatre-related. You can't take a backstage tour or learn about the history of Broadway in a fun, interactive way. (Before you mention liability issues, I took an awesome tour of the Metropolitan Opera and we went everywhere in that building!)

The Museum of the City of New York does have a theatre collection. The exhibit I saw last year is nice but it's a little spare and outdated. Plus, the Upper East Side location isn't exactly on the tourist track. The New York Public Library for the Performing Arts, at Lincoln Center, also has theatre exhibits from time to time but they're confined to one room.

Now I realize that space is at a premium in Times Square and expensive. The economy being what it is, the odds of creating a splashy new Museum of American Theatre are nil. Still, it would be a fine addition to a city that already has some of the finest museums in the world.
Posted by Esther at 8:15 PM