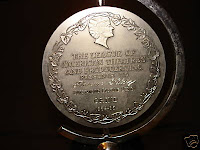 Wow, I'm kind of surprised by this: according to New York magazine, there's a Tony award for sale on eBay. I didn't even know you were allowed to sell one.

The award belonged to the late costume designer Florence Klotz, who won it for her work on the 1985 musical Grind. Ms. Klotz, who died in 2006 at the age of 86, won a total of six Tonys, including for Follies, Pacific Overtures and Kiss of the Spider Woman.

I know that since 1950, every Oscar winner has had to sign an agreement that neither they nor their heirs can sell the statuette without first giving the Academy of Motion Picture Arts and Sciences the right to buy it back - for one dollar! Here's an article from Forbes that explains it all.

I don't know whether the American Theatre Wing has a similar stipulation for a Tony. But according to a New York Times story, Christie's auction house sold one in 2007 for $4,800 and another, which may have been returned to the manufacturer because of a misspelling, sold last year for $5,676.25.

(Update: Kevin at Theatre Aficionado at Large says there is one, and it requires that anyone wishing to sell an award first offer it to the Theatre Wing for a nominal sum. Here are the details. Apparently, the Tony that Klotz received for Grind predates the requirement.)

I have mixed feelings about this. On the one hand, I agree with the Academy of Motion Picture Arts and Sciences spokesman who told Forbes: "They're not tchotchkes to be bought off of a shelf." On the other hand, I can sympathize with someone who needs the money, an heir who doesn't have an emotional attachment to the award or who might want to use the proceeds for some worthy cause.

Of course, a Tony won't net you as much as an Oscar. The Forbes story says that an Oscar can bring as much as $1.5 million. Bidding for the Tony starts at $10,000, although you can buy it now for $20,000. But I think the principle is the same - you should get one by earning it, not because you have enough money to buy one on eBay.
Posted by Esther at 12:25 PM