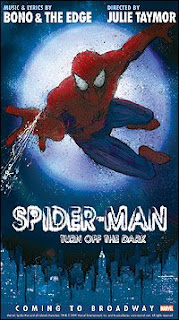 According to Playbill, the Spider-Man musical has a theatre - the Hilton; a first preview - Jan. 16, 2010; and a subtitle - Turn off the Dark. (Why don't they just call it Spider-Man the Musical? That's what everybody is going to end up calling it anyway. Oh, I just learned from the New York Times ArtsBeat blog that "Turn Off the Dark" is the title of one of the songs.)

Also, not to be nit-picky so early, but I'm a little concerned about the Hilton. All of those words people used to describe it turned out to be true - cavernous, barnlike. When I saw Young Frankenstein I was on the right orchestra, about two-thirds of the way back. In most Broadway theatres, that would be fine. But in the Hilton, I felt really far away.

I have to admit, I'm not into comic books and I'm not a big fan of superhero stories or Evan Rachel Wood, the only performer who's been announced so far.

But I'm excited about this because Bono and The Edge are writing the songs and Julie Taymor is directing. I like U2 - at least their older songs. And I'm a big fan of Julie Taymor.

When I was watching the fantastic documentary Jerome Robbins: Something to Dance About on PBS last week, I tried to think of choreographers working today who would be considered as innovative.

While I know she's not a choreographer, Taymor came to mind for her work on The Lion King. I loved the way she used puppetry and elements of Asian theatre and video projections to make the African landscape come alive. If anyone can put that space at the Hilton to good use, she can.

So I'm hoping this will be an uplifting collaboration.
Posted by Esther at 12:34 PM

Okay, Spiderman the Musical is just hillarious to me. Conceptually. :D

Because it's so barn-like, I'm going to assume Spider-Man will swing across the whole theatre space at some point. At this point, any less would be a disappointment!

(Man, by the time it opens, expectations are going to be so high, nothing will be able to satisfy us!)

Yeah, I know Amanda. I wasn't all that interested when I first heard about it. But I like U2's music and I think Julie Taymor is so imaginative that I'm looking forward to this.

I'm sure you're right, Vance. They want that big space for a reason. And I love flying in the theatre! Yeah, I agree that expectations will be soaring.

I guess today's announcement was tied to group ticket sales beginning. But what groups would buy tickets to a Broadway show a year in advance? I don't understand that part.

Unless he spends a lot of time swinging through the theatre and really putting on a wow performance, I'm so skeptical about the way this could work. I'm a long time Spidey fan from the cartoons to the movies but I dunno!