Say it ain't so Bruce 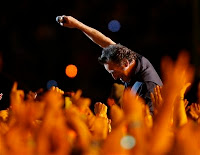 Seeing Bruce Springsteen and the E Street Band was my only reason for tuning in the Super Bowl yesterday. (Okay, I was a little curious about the commercials, but the ones I saw weren't too memorable.)

I'm more in agreement with my friend Dan at Media Nation than I am with Stephen Metcalf at Slate about Bruce's halftime performance. He says Bruce should have played "The Wrestler." I don't know - I loved the 12-minute medley: "Tenth Avenue Freeze-Out," "Born to Run," "Glory Days" and "Working on a Dream." I love how at age 59, Bruce can move around the stage with so much energy. He still puts on a great show.

One thing I did notice was the wildly enthusiastic crowd. Little did I realize until I read Metcalf's column that they weren't lucky football fans plucked from the stands to get an up-close view of the Boss. They were plants!

According to this story from Tampa Bay Online, producers of the halftime show sent out a call for 2,000 excited fans. "Volunteers will get to be on the field at Raymond James Stadium as part of the concert, but won't get tickets to the game. Show organizers advise those selected to record the show at home and watch it later."

I should have realized that this was a 12-minute music video and the "audience" wasn't in the stadium but the millions watching at home. I guess Courtney Cox wasn't some random fan pulled onto the stage in the "Dancing in the Dark" video either. I am so gullible!
Posted by Esther at 8:43 PM

Just to be clear ... I can't stand "Glory Days," but it fit the theme. Bruce and Steve were pretty funny.

Thanks for clearing that up, Dan. I had no idea you couldn't stand "Glory Days." Or maybe I knew once and just forgot. Anyway, you're right, it was funny seeing them together like that!

I didn't know that, plants?! I loved your Courtney Cox line, haha. The show was good though.

Thanks, Dale. I thought the crowd at the halftime show was a little too good looking and a little too enthusiastic!