A win for the arts 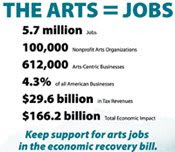 The Senate passed the $787-billion economic stimulus bill a few minutes ago. The House approved it earlier in the day. And guess what - money for the arts is back!

In drawing up a compromise bill, House and Senate negotiators dropped an amendment from Sen. Tom Coburn of Oklahoma that excluded assistance for museums, theatres and arts centers.

The bill includes $50 million to support projects in all 50 states that create and preserve jobs in the nonprofit arts sector. The money will be handed out via the National Endowment for the Arts. According to a story in the Chronicle of Philanthropy, 40 percent will be distributed to state and regional organizations and 60 percent to projects selected by competition.

Apparently a grassroots lobbying campaign by Americans for the Arts is partly responsible for the turnaround. It urged people to call and e-mail their representatives and ran ads like the one above.

The group estimates that for every dollar the NEA distributes, another $7 is generated through local, state and private donations, which means $50 million could create $350 million worth of investment.