Frank Vlastnik and Ken Bloom, who wrote Broadway Musicals: The 101 Greatest Shows of All Time, are answering questions at the New York Times ArtsBeat blog. (A second installment, on what makes a great Broadway show, will appear tomorrow.) 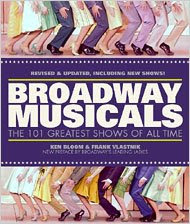 The questions and answers cover familiar ground: How do we build the next generation of theatergoers? Why aren't more Broadway plays and musicals available on dvd? Why is there a trend of movies being made into musicals? One that I thought was especially informative: Why is everything so loud to the point of discomfort? The authors get into a discussion about how, before miking, performers had to use their muscles. "Today’s performers hardly have to push sound past their vocal chords and their performances suffer."

And I have to take issue with them on one answer. A reader who lives in the Midwest and sees touring productions for $25 a ticket but has never been to Broadway asks, "Why should I spend my savings to travel to New York and pay five times that to see a show?"

Bloom answers, "For the most part, today’s touring shows have fewer stars, cut-down sets and orchestras, and less rehearsal. Trust me, there’s absolutely no comparison between a touring production and the original Broadway production."

First part, I definitely agree with - on tour the sets won't be as lavish, the orchestra won't be as large, the performers may not be big stars yet. New York is a wonderful place to visit in general and if you're a theatre fan, you should try to get there. Broadway is such a unique, exciting experience and with discounts, it doesn't have to cost $100 a ticket.

I mean, that's a bit like saying why would I ever want to go to a Major League Baseball stadium when I can see my Triple A team right here at home? Sure, it'll cost more, but if you're a baseball fan, you want to attend a major league game at least once. Believe me, I've done both. Same thing with theatre.

But to say that there's "no comparison" is a trifle unfair. Not everyone can get to New York City, just like not everyone lives near a major league baseball team. (Ok, enough with the sports analogies!) Seeing a Broadway show on tour can be powerful and immensely entertaining. I wouldn't be so quick to dismiss it.
Posted by Esther at 8:10 PM

Totally agree with you! I saw Phantom in LA with Michael Crawford; Anthony Quinn, Lila Kedrova and Robert Westenberg *sigh* in LA in Zorba the Greek; and a fabulous performance of Les Miserables also in LA. Although, it may not be a good comparison since technically, they weren't traveling shows. I agree with you nonetheless that traveling shows are still worthwhile for those of us that aren't able to travel to Broadway often to catch shows.

Yeah, I think he could have given an answer to the question: Why come to Broadway? without being so dismissive of touring productions. Spring Awakening, The Color Purple and A Chorus Line are all coming my way in the next few months and I'm really looking forward to them.