A history lesson from Tina Fey

I've been thumbing through Live from New York, an oral history of Saturday Night Live. It's a great book for leisurely reading. There's one anecdote after another and almost everyone who's been connected with the show over the years is included. 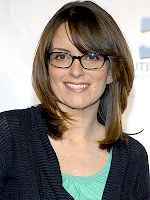 This quote from Tina Fey made me laugh:

"The seventies and the twenty-first century are just so different. There's no drugs and there's no sex at the show now. I would have been terrified if I was here back in the old days."

I know what she means. Have you ever watched any of those early shows? I have the first season on dvd and there are a lot more drug references than I think you'd ever see today.

I said almost everyone is included in the book but there's one notable exception. Apparently, Eddie Murphy has some bitter feelings toward SNL and declined to be interviewed.

Hey, I know what that's like. I once tried to get an interview with him myself, when he was on tour doing his standup routine in the mid 1980s. I even made a personal pitch to actress Susan Saint James, wife of then-producer Dick Ebersol, who promised to give him my business card.

For the next few weeks, I kept getting notes on my desk from colleagues (this was before voicemail) saying that "Eddie" had called. He never did.
Posted by Esther at 1:04 AM

I'm pretty sure that Tina wasn't referring to drug references but rather drug use.

Yeah, I know. Although I bet the two went hand-in-hand: more drug use by people associated with the show, more drug references in the show!

Oh Eddie, give it up!

I'm afraid Eddie's just not interested in talking to me. ;-(