At 92, a new stage for Kirk Douglas 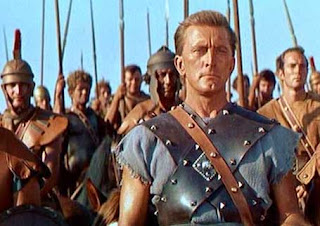 I must give props to 92-year-old Kirk Douglas, who's planning four performances of a new one-man show next month at the theatre in Los Angeles that bears his name. Before I Forget will feature the actor, author and philanthropist talking about his life and career.

Michael Ritchie, artistic director of the Center Theatre Group, which includes the Kirk Douglas Theatre, tells the Los Angeles Times Culture Monster blog that it was Douglas's idea. "It’s anecdotes, but there’s also a philosophical thread throughout. It's about being an artist and an actor. It’s his life, told through some of his characters."

Of course, Douglas is best known for movies such as Spartacus, Lust for Life and Paths of Glory but my favorite is a 1966 film set in Israel called Cast A Giant Shadow. I found it when I was channel-surfing late one night and the movie inspired me to make my first trip to Israel, in 1995. I ended up living there for a year, so Kirk Douglas has had quite an impact on my life.

Douglas suffered a stroke in 1996 that partially impaired his speech. The last movie I saw him in was It Runs in the Family in 2003 and it was clearly affecting him. I'm not sure how much stage work he's done since his last Broadway appearance, in One Flew Over the Cuckoo's Nest, in 1964. But I'm sure the audience will be very understanding and hanging on every word.

Maybe he'll even take the show on the road!
Posted by Esther at 8:46 AM

Hey cool! I really like Douglas. I grew up on one of the silly movies he did in the 70s (The Villain) and have loved him since. I recently saw him in Out of the Past and that was good, too.

Yeah, wish I could be there. Like I said, I know he had trouble speaking after his stroke, so good for him for taking this on. A movie's one thing but this is live theatre. Ok, it's only four performances but still, I think it's pretty inspiring!