The craziest place in the world 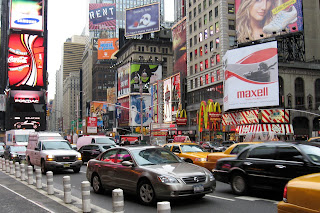 “It’s the craziest place in the world. Why change it?”
Aphrodite Kalonturos, of Delaware, commenting on a plan to close Broadway around Times Square to vehicles.

Okay, that quote cracks me up. And there is a certain logic to it. After all, honking horns and exhaust fumes, sidewalks so jam-packed you can barely move, are part of what gives Times Square its ambiance - right up there with the news tickers, giant advertising posters and the Naked Cowboy.

The city's plan, according to The New York Times, is to close Broadway between 42nd Street and 47th Street, at Times Square, and from 35th Street to 33rd Street, at Herald Square, starting in late May. The goal is to create vehicle-free plazas with chairs, benches and cafe tables.

At a news conference this week, New York City Mayor Michael Bloomberg said, “People don’t come to look at cars stuck in traffic. They come to look at the lights, the buildings and the excitement, and this is going to have a lot more of it.”

There's quite a bit of negativity in the comments on the Times Web site. Some see it as a way to make the area safer and point out that many European cities have centers that are traffic-free. Others view the plan as the ultimate Disneyfication of Times Square. They wonder how taxis, buses and delivery trucks will be affected and whether it will make other streets even more congested.

As someone who's spent a bit of time walking through Times Square, I'm all in favor of making it friendlier to pedestrians. I like the idea of giving people more room to move around so we're not all packed like sardines on the sidewalk. As one comment said, "The Times Square Area is so congested people walk out on the street anyway. This just makes it official."

On the other hand, I think we have to be realistic. It is what it is - a major thoroughfare, a noisy, sweaty, crowded, urban hub brimming with activity - the crossroads of the world. Maybe that's part of the appeal.
Posted by Esther at 12:05 AM

I hadn't heard about this. Crazy. I don't know if it'll feel like Times Square there once all the cars are gone. Of course, I went there when the streets were busy but not so jammed that it was dangerous.

BTW - Kudos for the Naked Cowboy link. Ha! I didn't see him when I visited TS.

I've seen him once or twice. I don't quite get the attraction but he does seem to draw a crowd. ;-) Hopefully I'll get to New York this spring and I can give you a full report! But yeah, it would be strange with no cars.