For 50 years we've been on our own 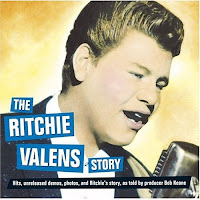 "I can't remember if I cried
When I read about his widowed bride
But something touched me deep inside
The day the music died."
Don McLean
"American Pie"

It's been half a century since the plane crash on Feb. 3, 1959, near Clear Lake, Iowa, that killed J.P. "The Big Bopper" Richardson, Buddy Holly and Ritchie Valens. Rock 'n' roll veterans gathered in Clear Lake yesterday to remember "the day the music died."

I heard Don McLean sing "American Pie" once, at the New York State Fair. Here's an interesting interpretation of what the song means.

The three musicians have been immortalized in the musical Buddy, which opened originally in London's West End, played for a total of 225 performances at Broadway's Shubert Theatre, from Oct. 23, 1990 to May 19, 1991, and has since been presented around the world.

Born Richard Steven Valenzuela in California in 1941, he was the first Chicano rock 'n' roll star and has served as an inspiration to Latino musicians. His story was told in the 1987 movie La Bamba, with Lou Diamond Phillips. I loved the movie and the soundtrack, with music by Los Lobos.

With the success of In the Heights, about a Latino neighborhood in New York City, and the upcoming West Side Story revival, with actors singing and speaking in Spanish, I think this is a great time to develop a West Coast Latino story on Broadway.
Posted by Esther at 3:50 PM