Ingalls family is on the movie again 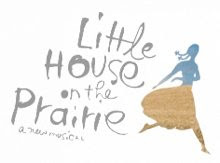 So the musical Little House on the Prairie didn't quite make it to Broadway after its premiere last fall at the Guthrie Theater in Minneapolis but at least it's coming to the tri-state area. New Jersey's close, right?

A national tour has been booked through June 2010 and these are the venues I've seen announced so far:

The show is coming to Toronto in early 2010 but no dates or location have been announced yet.

Melissa Gilbert will reprise her role as Caroline "Ma" Ingalls but I don't know whether any of the other Guthrie cast members are joining her. According to the Minneapolis Star Tribune, the musical, which didn't get great reviews but played to sellout audiences, has reportedly been "tweaked and re-designed."

(Update from Playbill: Steve Blanchard will continue as Pa and Kara Lindsay will reprise her role as Laura. Also, a few more cities have been announced, including Houston, Tempe, Ariz., and Sacramento, Calif., but no dates have been set.)

Personally, I thought the musical was kind of a mixed bag - some elements I liked, some I didn't. Maybe part of the appeal was being with friends and making my first visit to Minneapolis, but overall I enjoyed it. And I'm hoping the tour means there'll be a cast recording.

I think this is the kind of show that would do well on the road. It's got a "name" in the cast, the Little House books and television show are so familiar and it'll appeal to all ages. It's a great musical for children or adults who've read Laura Ingalls Wilder's series about life on the prairie in the 19th century.

Sure, I'm a little sad that it wasn't up to Broadway quality but on the bright side, it has the potential to draw a young audience. The more positive experiences you can provide to kids, the greater the chance that they'll grow up to be adult theatergoers. At least I hope so.
Posted by Esther at 3:55 PM

Yeah, it's part of the subscription here that I'm trying to decide if I should renew. Im meh on Little House. I wouldn't mind seeing it but it's not like I'm running to see it.

The Fiddler you just saw is part of it, as well as a revival of Joseph (I think with the same TV casting that they did here with Sound of Music, copied from London). A tour of Young Frank (bleh), London import Raggae musical The Harder They Come (meh), and Prescilla QOTD (YAY!).

Of course, considering this year they cancelled a show, and there's already rumours Prescilla may never happen (with this economy), I'm dubious, especially since the refund for the cancelled show was Riverdance (yuck) or credit towards another show or renewal but minus a service fee (what B.S.). I'm kinda peeved right now.