How high can ticket prices go?

I think I once paid $50 to see Bruce Springsteen in concert but that was as high as I'd ever gone for a ticket to a single entertainment event - until I started going to Broadway shows. Now, I routinely pay twice that much without thinking twice. 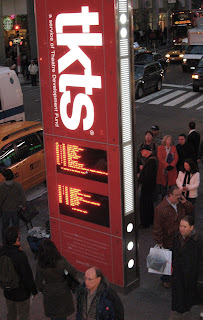 I've gotten better at using discount codes from places like Playbill but because I'm from out of town and have a limited amount of time in New York, and because my increasingly arthritic knees crave the extra leg room in the orchestra and I like being close, I've bought plenty of full-price tickets. I've even splurged for premium seats on a couple of occasions. Like most people, I've cut back on my spending a bit over the past few months. But I don't want to cut back on my theatergoing.

I'm not like most tourists. When I go to New York, I see a lot of shows. So New York Gov. David Paterson's proposal to add a 4 percent tax to theatre tickets certainly hits home. I have to agree with Steve on Broadway that theatre owners should think about reducing prices or cutting fees.

Rocco Landesman, the president of Jujamcyn Theatres, which owns five Broadway houses, testified yesterday in Albany. He noted that visitors come to New York to see theatre much more than they do to attend sporting events. Some lawmakers made the point that teams like the Yankees also attract tourists.

Sure, I know people who've come to New York for a Yankees game but I still think Broadway is the biggest draw. There's no doubt that having a thriving theatre district - with all of the ancillary businesses like hotels, restaurants and souvenir shops - plays a big role in the city's economic well being.

Afterward, Landesman said that theatre owners and producers were “going to have to look hard at our cost structure” and try to find ways to lower ticket prices to make theater more accessible. I hope he follows through because I could use a break - and so could a lot of other people.

Theatre is the main reason why I come to New York. I love being able to see a show every night - plus two on weekends. The thought of not having my tickets with me when I get there - of having to take my chances at the TKTS booth or lottery - does not make me happy. Neither does the prospect of seeing fewer shows.

Are there any balconies with leg room?
Posted by Esther at 3:15 PM

Leg room is always an issue for me. How I envy Joel Grey and his little legs (I saw him once at a show and it made me envious of all the room he has). Theatre tickets is one of things I don't mind overpaying for especially if there's a comfort question.

Joel Grey, wow! Yeah, he is a little guy. I'm not even tall but the older I get, the harder it becomes to sit with my knees bent. I like to be able to stretch my legs out! I agree, I don't mind paying extra for comfort, especially since you usually can't more around to another seat.

Totally agree with you - the draw to go to NYC is for the theatre, not the sports.

Thanks, Margo. Especially when you add in all of the foreign tourists, Broadway is an even bigger draw.