Broadway is now playing at the palace 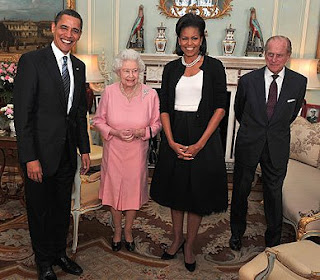 Sure, some eyebrows have been raised over the fact that President Obama gave Queen Elizabeth an iPod but I think it's an inspired gift.

I mean, how cool is it that he gave her something I'd like to receive? Also, what could be more American than musical theatre?

Finally, a British designer named Jonathan Ive played a major role in creating the iPod, which helped revive the sagging fortunes of Apple Computer. It's the greatest example of Anglo-American cooperation since Lend-Lease.

Here's a list of the songs. Apparently they were all taken from a CD called Ultimate Broadway. They're classics, featuring a mix of British and American performers, and I have almost all of them on my iPod. Okay, excuse me while I go create my very own royal playlist!
Posted by Esther at 10:00 AM

Wouldn't it have been cool if it was an Obama-branded iPod with his campaign logo on it, like those U2 iPods a few years ago? It could even be blue.

If the Whitehouse had googled QEII, they'd have know that she's been rocking with an iPod since 2005...but I have to admit that I'm smiling that the new one includes Broadway.

Count me in the no column on this one. Gifts for heads of state are supposed to be special one-of-a-kind things and not something anyone can pick up on amazon.com. We know the Queen already has an iPod and she certainly has the cash to buy the Ultimate Broadway CD. If they were going to give her show tunes, why give her a playlist that has as many Brits as Americans? And why not include at least a couple of songs from more recent shows than Rent? If the Queen is a closet show queen (and wouldn't that be cool?) why not give her something like the original score, written in the composer's hand, of her favorite show or tune? Sure, that would have taken some work but hey, they've got a staff. Sorry to rant about this but my husband K is tired of hearing me go on and on about it and so I couldn't pass up this opportunity to vent elsewhere.

Hey Jan,
Thanks for the comment. You're welcome to vent on my blog anytime, about anything!

Yeah, you and Sarah are right that the queen already had an iPod. But it was an older model and it was time for an upgrade. ;-)

Seriously, though, as pleased as I am that she got a Broadway-related gift, I understand your point that they could have put a little more thought into it. She did get the rare, autographed Richard Rodgers songbook, which I neglected to mention.

But yeah, they didn't exactly put much thought into the songs. Some staffer must have seen the Ultimate Broadway CD on Amazon and thought, that's perfect!

I dunno, Jeff. An iPod with Obama's campaign logo would have looked cool but maybe would have run afoul of various campaign laws. ;-(