Paul and Ringo reunite and I'm not there 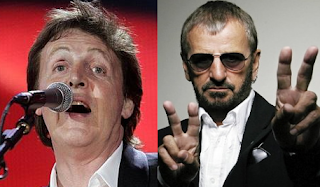 I sighed this morning when I turned on my computer and checked the headlines from The New York Times.

Paul McCartney has always been my favorite Beatle - because he's the cute one and I'm so shallow. (Just kidding! He is my favorite but I'm not that shallow. I'm a fan of his singing and songwriting ability.)

Anyway, last night, McCartney and Ringo Starr reunited on stage at Radio City Music Hall during the Change Begins Within concert for the David Lynch Foundation, which promotes teaching transcendental meditation in schools. They shared a microphone to sing "With a Little Help from My Friends" and embraced. (Awww, how nice!)

The New York Times' Jon Pareles has the scoop in the Times' ArtsBeat blog.

Paul McCartney is the one performer I've always wanted to see but never had an opportunity.

I came close once, when he scheduled a concert stop in Syracuse. I got up early to stand in line at the Carrier Dome box office to get tickets for myself and some friends. Just to show you how long ago it was, you couldn't buy them online.

Then McCartney canceled the concert, because it conflicted with some television commitment I think. It was never rescheduled.
Posted by Esther at 9:30 AM