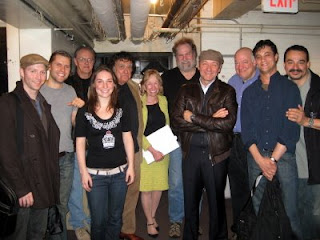 Kevin Spacey was in Boston and I missed him. Darn it! If only I'd known that he was Twittering, or Tweeting, on Twitter. I could have followed his Twits, or his Tweets. (In a respectful, non-stalkerish way, of course.)

At first I wasn't sure whether it was the real Kevin Spacey or the fake Kevin Spacey, because I know that does happen.

Apparently, some celebrities use ghostwriters for their 140-character messages. There's a great comment from NBA star Shaquille O'Neal, who does his own Twittering. He told The New York Times: "It’s so few characters. If you need a ghostwriter for that, I feel sorry for you.”

I think it really is Kevin, or at least someone who works for him. There are lots of Tweets about the Broadway revival of Alan Ayckbourn's trilogy The Norman Conquests, which began previews this week at Circle in the Square. It's a transfer from The Old Vic Theatre in London, where Kevin is the artistic director.

He also mentions that he saw Two Men of Florence at the Huntington Theatre Company in Boston. He really was there. I have proof! I found a photo on the Huntington's blog. Nice to know that he's getting out and seeing some shows.

It was kind of hard to follow the messages at first, because I guess other people - "followers" - can leave comments on your Twitter stream. But eventually I figured out which ones were from Kevin:

"Got up on stage last night at The Box sang 'Just a Gigolo' for Philip Green and wife who opened TopShop/NYC. Simon Cowell asked for encore!"

"I can assure everyone who is wondering if this is really me that it is. No ghosts here. Put up photos to prove. Lets just believe. Okay?"