Why Grey Gardens makes me queasy

So, the Grey Gardens movie premieres on HBO tonight, with Jessica Lange as "Big Edie" Beale and Drew Barrymore as her daughter, "Little Edie." 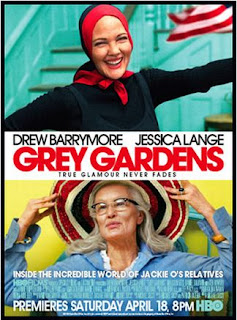 I won't be watching, since I dropped HBO a few months ago. All of their original programming is available on dvd soon enough and I can just get it from Netflix. Also, I'm not totally on the Big Edie, Little Edie bandwagon.

When I saw the 1975 documentary Grey Gardens about the Beales - aunt and cousin of Jacqueline Kennedy Onassis - my initial reaction was, these women are mentally ill. They're living in squalor in a decaying Long Island mansion and clearly have trouble coping with everyday life. I felt that filmmakers Albert and David Maysles exploited them a bit.

I guess I'm not the first person to raise the issue because it's addressed on the commentary track. The producer and director argue that Big and Little Edie were nonconformists, that their lives were examples of how opportunities for women of their era were constricted. If they were British we'd be calling them eccentric and their behavior would be considered charming.

Later, I saw Christine Ebersole on The View. She played the older Edie in the first act and the younger Edie in the second act of the Broadway musical Grey Gardens, and won a Tony award. One of the hosts brought up the same question: Wasn't there something emotionally wrong with these women? Ebersole gave pretty much the same answer, that they were artistic types, nonconformists, etc.

But leaving food out for the raccoons in your attic is not normal behavior. Neither is leaving bags of garbage - and worse - around your house. I felt these women were being romanticized and their plight explained as "nonconformity" when it was really closer to mental illness.

I've softened a little bit. There's an audio interview with Little Edie that was recorded a few years after the documentary came out. On it, she talks about how much she and her mother liked their portrayal. And she actually sounded more lucid than she did in the film.

Also, I subsequently saw Grey Gardens on Broadway and Ebersole was great. She absolutely channels Little Edie in the second act. And she creates a memorable Big Edie in the first act, really out of whole cloth, with no documentary to guide her. I think Little Edie would have been thrilled and flattered by her performance.

Still, I couldn't get away from the fact that I'd seen the documentary. The way those two women lived was not okay. No one would want to live in those conditions. Check out this 2002 New York Times obituary for Little Edie for the details.

I'm definitely curious about the movie. But I just have a tough time seeing the Beales as icons, as cult figures to be lionized. To me, they were two lonely, troubled women who needed help. And there's nothing charming about their circumstances.
Posted by Esther at 12:10 AM

I'll be watching tonight because the whole thing is so captivating. David Letterman was posing the same questions to Drew Barrymore the other night about the mental illness component and she skirted around it by saying these women made choices, how it's a love story and so on. There's no denying there's a mental illness/co-dependency component to the whole story but at the same time, it's incredibly mesmerizing.

While I wasn't ecstatic about the musical as a whole, Christine Ebersole and Mary Louis Wilson were absolutely perfect in their performances and deserved the accolades. I'm curious to see what Drew and Jessica Lange do with it.

Hey Dale,
I will watch it when it comes out on dvd and I agree the story is mesmerizing in a train-wreck kind of way. I wish I'd seen the Drew Barrymore interview. To say these women made choices, I dunno. They were basically abandoned by their family to live in squalor until Jackie O came along.

Funny - I just used the word "charming" to describe them. Maybe they were mentally ill? I don't know. But, most importantly, they were happy. I just reviewed the HBO movie on my blog. LOVED IT.

Hey Bob, thanks for the comment! I just read your review. I'm not so convinced they were happy. (Although maybe that's the way they were portrayed.) It seems to me they both dealt with a lot of disappointments in their lives. Big Edie was abandoned by her husband and sons and Little Edie gave up her career to take care of her mother.

I was told right after filming of the HBO film wrapped up in the fall of 2007, that I would be blown away at the last scene, where Edie sings Tea For Two at Reno Sweeny, and I was ! I had supplied the film company with the only recording in existence of Edie singing the tune, only this wasn't from her actual performance at the club, but rather her singing it just for me at one of my many visits to Grey Gardens. Drew sang it exactly, phrase for phrase as I have it on tape. Edie and I actually met that night at Reno Sweeny, and my relationship with Grey Gardens has now spanned over 3 decades. For our complete review, check out our blog at MyGreyGardens.com (HBO film review by Robb Brawn & Lee Arboreen), and be sure to check our Youtube video uploaded 4/18/09 the same day as the HBO film release. Click
GREY GARDENS PROMO to view the video

I highly recommend the movie if only for it's incredibly humanizing point of view.

I think the movie did something the documentarians could never have done in providing a full backdrop as to how these two society women became the people we all know them as.

Big Edie's first marriage ended during an economic depression. All their lives the Beales had servants waiting on them hand and foot. When the marriage collapsed and their money ran dry, what reasonable options did they have? They were members of the elite who had been raised to have others tend to all their needs, with money picking up the slack.

In the movie, Barrymore (as Edie obviously) comments that East Hampton charges for garbage pickup. You see them fighting winters with broken heat, unable to afford to pay a repairman.

It was a slow and painful decay and while I'm sure it had some negative impact on their mental states, I don't think it's enough to call them crazy.