Watching my tv on dvd 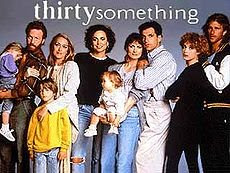 Catching up on tv series that I missed is one of the joys of my Netflix subscription. (Why didn't I buy stock?!) Some, I've loved - The Sopranos, Arrested Development, Sex and the City. Some, I watched a few episodes and decided they just weren't for me - Sports Night.

In fact, I think I prefer television this way. I'd rather wait until the end of the season and just catch up on all the episodes at once. And honestly, with some series, like Lost, I'm so lost that I might as well wait until the final episode airs and then watch it from beginning to end.

Anyway, I never watched thirtysomething when it aired but I've enjoyed one of its stars, Patricia Wettig, as the devious Holly Harper on Brothers & Sisters. So now that it's finally coming out on dvd, I'm curious enough to check it out. According to the Los Angeles Times, Season 1 will be released on Aug. 25, with subsequent seasons coming about every six months.

The series, about a group of baby boomer yuppies in Philadelphia in the 1980s, was influenced by the 1983 movie The Big Chill. It ran on ABC for four years, from 1987 to 1981. And of course, it added a word - thirtysomething - to the vocabulary.
Posted by Esther at 12:20 AM

Esther, I'd also recommend "My So-Called Life" and "Freaks & Geeks" if you've never seen those, as well as "Veronica Mars." All topnotch TV.

Wettig isn't devious on "thirtysomething," but she's pretty prickly; one of the things I loved about the show was that it wasn't afraid to let the characters be ugly people sometimes; that was new to me on TV when I was 17 (it's also why the series was infamous for its "whining"). And I don't watch "Brothers & Sisters" but I know her husband (Ken Olin) is one of the creators, and might even be on the show now. On "thirtysomething" he's the lead; he plays her husband's business partner. Both are amazing.

This is my absolute favourite way to watch good old teevee. It's so hard to stop when you find a good one you like though. Episode after episode and all you've got to show is popcorn dust all around you on the sofa. I love it.

Oh, what a blast from the past. I LOVED Thirtysomething when it was on TV (even though I was a late 20 something at the time). I remember when it was going to be canceled after the 2nd season(or maybe it was the first)and there was a letter writing campaign by fans to keep it on the air. And it worked!!! Tried the same thing a few years later with Homefront - didn't work that time. Enjoy it! I don't think you'll be disappointed.

Thanks, Kari. Yep, Ken Olin is on Brothers & Sisters. I should have mentioned him but I was a bit of a lazy blogger and it was getting past my bedtime. ;-)

I have seen My So-Called Life and I really liked it. I've heard Freaks and Geeks is great, too. I definitely have lots of holes in my tv-watching.

Dale, I agree. I'm definitely getting spoiled. How did I live most of my life only being able to watch tv shows one episode at at time?!

Thanks, Pam! Glad I was able to bring stir some good memories. I will definitely report back.

No on Sports Night? Aw, I loved that show.

But yah, try Veronica Mars. Or check out Andy Richter Controls the Universe.
Or Everwood. (S2 is coming!)

or Once and Again. the only show that has EVER represented architects in a realistically depressing light.

Vance, a series about architects? I will have to check it out. C'mon, it can't be that depressing!