It's the best musical. Ever. 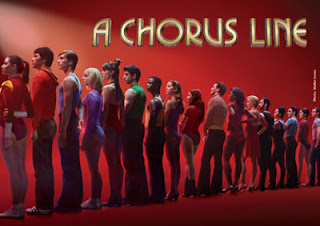 I'm psyched about seeing A Chorus Line on tour this weekend for two reasons.

It was the first Broadway musical I ever saw. (Not to be confused with the first musical I saw on Broadway, which would be Curtains.) It was in Boston, either in the fall of 1977 or the winter of 1978, when I was a freshman in college.

I'm not begrudging A Chorus Line any of its glory. It's certainly a highly acclaimed musical, winning nine Tony Awards in 1976, as well as the 1975 Pulitzer Prize for Drama. In 1983, it became the longest-running show in Broadway history, closing on April 28, 1990, after 15 years and 6,137 performances. The Broadway revival ran for nearly two years.

I hadn't listened to the original Broadway cast recording for years but I picked it up again a short time ago and I'd forgotten how incredibly poignant it is, listening to these dancers tell the stories of their lives. So after 30-plus years, I'm ready to put on my top hat and see it again.

Still, I'm curious how A Chorus Line got that label. It's such a bold statement that doesn't leave open much room for argument. I thought maybe it came from the 1975 New York Times review, written by Clive Barnes. Nope. Although Mr. Barnes did have some very complimentary things to say about the show - the cast was "100 percent marvelous."

Now I'm thinking maybe it comes from something in the show, a song lyric or line of dialog. Maybe it's a clever marketing idea or maybe some critic really did use that phrase. Maybe it's obvious to everyone but me. Hopefully it will all become clear on Sunday afternoon.
Posted by Esther at 12:10 AM

Currently, Billy Elliot has the audacity to label itself as "The Best Musical You'll Ever See" based on the raves of a certain review. Sound familiar?

Oh wow, I didn't know that about Billy Elliot! I guess the Best Musical Ever tag must have come from a review, too. When I see A Chorus Line I can compare and decide which one really is the best musical ever. ;-) Anyway, I'm looking forward to a sensational time!