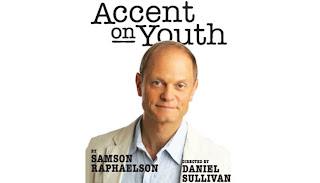 Broadway.com has an interview with the very talented and gracious actor, whose play Accent on Youth opens Wednesday at the Samuel J. Friedman Theatre.

I still remember jumping off the couch and cheering when he won the Tony award in 2007 as the singing and dancing detective in Curtains.

On winning the Tony:

"I had all those years in Frasier at awards ceremonies, where I’d gotten up because I’d won or stayed sitting because I didn’t. I’m used to all sides of that. But at the Tonys, there was just… Being back in the theater means so much to me, because Broadway means so much to me, because of the experience of doing that show and what we all had together. All that combined was overwhelming. And I was surprised to be overwhelmed because I thought I was an old hand at this stuff."

The difference between musicals and plays:

"Those [Curtains and Spamalot] were fairly large musicals, and you had a big orchestra underneath you, which is the engine that carries you and the audience along. In a play, the actors onstage are the engine, so I end up less physically tired, but slightly more brain fried."

"People are really nice. They come up a lot on the streets of New York, and of course, more when there are tourists in town. But regardless, there’s such affection for the show. Now it’s in reruns, and people really appreciate it. So it’s not about screaming. More often, it’s a nice quiet conversation on the street. I’ve had a million of those, and I love it."
Posted by Esther at 9:23 AM