Thoughts on an afternoon at the theatre 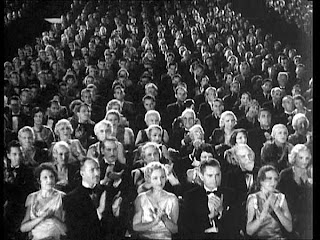 I'm working on my review of A Chorus Line at the Providence Performing Arts Center but first let me make a few observations.

Perhaps it was my imagination, but it seemed like there was quite a bit of food being consumed by people sitting in the row in front of me. Don't they realize those crinkly wrappers make noise?

Second, there's no intermission. That means lots of people getting up to go to the bathroom, then returning to their seats. I think the musical is supposed to be 2 hours but it ran a little longer. There should be a rule: If you're going over 90 minutes, you must include an intermission.

Third, I'm assuming the people sitting next to me suddenly became violently ill or had to go really bad (totally understandable) once the show ended. Otherwise I can't see any justification for leaving while the actors are asking for donations to Broadway Cares/Equity Fights AIDS.

I'm sure the people who left didn't realize it, but the musical's original director and choreographer, Michael Bennett, died of AIDS, as did James Kirkwood and Nicholas Dante, who wrote the book. In any case, it would have been respectful if they'd stayed. I'll give them the benefit of the doubt. Maybe they weren't aware of the traditional BC/EFA appeal or maybe there truly was an emergency.

And I know times are tough so I appreciate the way the pitch was presented: If everyone just gives a dollar, we can raise $2,000 this afternoon. Perfectly reasonable.

So when the tour comes to your town people, please stay seated during the BC/EFA appeal. And bring an extra dollar. If you can spare $10, you'll get a nifty bag that says A Chorus Line right on it - perfect for carrying around your gym clothes.

Now, one funny thing. As I was walking out, someone behind me said she was disappointed in the show. "I thought it would be more like 42nd Street."
Posted by Esther at 12:30 AM

So...how was the show? Who's playing Cassie these days?

I'm working on my review right now! The condensed version: I liked it but I didn't love it. And Robyn Hurder is playing Cassie.