Some musical news and views 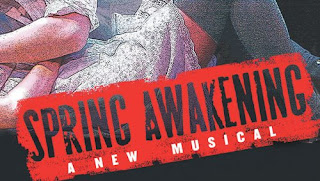 Okay, it's been a few days since I've had a theatre-related post and there's quite a bit of interesting news, so it's time for a little catch-up.

The Broadway revival of West Side Story is launching a national tour starting in the fall of 2010. I think this is exciting. Sure, it's fun to see the new shows when they come on tour but it's also nice to catch up with the classics, especially one with a new twist. And a production that incorporates Spanish dialog and songs hopefully will attract a whole new audience. I'm assuming the tour will keep the Spanish parts. So it's definitely something to look forward to.

The Tales of the City musical is going to be developed this summer at the Eugene O'Neill Theater Center in Waterford, Conn., as part of the National Musical Theater Conference. It features a book by Jeff Whitty of Avenue Q and songs by the Scissor Sisters - Jason Sellards and John Garden. I've read the first book in the Tales series and I liked it. Sometimes you read about a planned musical and then, nothing. So I was happy to read that this one is coming together.

McG (Joseph McGinty Nichol) is in talks to direct the movie version of the Tony-winning musical Spring Awakening. I'm not sure how I feel about this one. On the one hand, he does have experience making music videos and a lot of time, Spring Awakening does feel like you're in a club listening to a cool new indie rock band. On the other hand, McG directed Charlie's Angels. I just don't know. I loved Spring Awakening on stage and I don't want them to mess it up.
Posted by Esther at 12:15 AM

McG did Chuck on TV and produced The OC. So points there. But his movie track record isn't as great.

I agree about Spring Awakening, but I love that show so much that I'll be happy to see it in any form. One of the things I miss about living in NYC is the ability to decide to go see a Broadway show at the last minute, just randomly. I did that a few times with S.A. - just decided I was in the mood, and went & bought myself a ticket. Saw it 4 times on Bway!

Hey, CP! I'd love to live in New York just for that very reason. But there's good theatre everywhere. Plus, you have a reason to come back and visit! Okay, maybe not as spontaneously but you can pack a lot of shows in a week.

Sadly, I was only able to see Spring Awakening once on Broadway. But it was thrilling and I got to meet the whole cast at the stage door afterward and they were as nice as could be. I'd love to have gone back a second time to sit on stage, right next to John Gallagher, Jr. ;-)

True, Vance. Still, maybe he could get the sense of energy, the electricity, to transfer from stage to screen.