Last month it was Arthur Laurents and now, New York magazine writer Jesse Green has turned his attention to Dolly Parton. Her musical 9 to 5 opens at Broadway's Marquis Theatre on April 30 and she comes across as very gracious and down to earth in this profile. 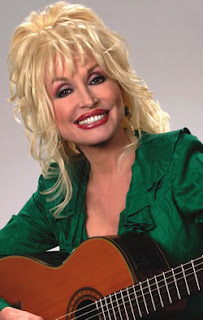 Green writes that the idea for a 9 to 5 musical came from Robert Greenblatt, of Showtime, who bought the rights to the 1980 movie. Parton sent Greenblatt a few sample songs and told him if they weren't right, she wouldn't be offended. He could hire another songwriter and still use her title tune.

(Of course, her songs turned out to be just fine, although I haven't heard any of them yet - except for "9 to 5," which I already knew.)

And this piqued my curiosity: She has an autobiographical Broadway show in the works.

But the funniest passage is when Green visits Dollywood, in Pigeon Forge, Tenn., and Parton's creative director, Steve Summers, tries to convince him to try some fried bologna:

“I eat your sushi when I’m in New York,” says Summers. Though I have ground my supply of Lipitor into a paste and swabbed it over myself as a shield against ambient cholesterol, I feel my defenses beginning to crack."
Posted by Esther at 7:10 AM

great article. Thanks for directing my attention to it.

You're welcome New York magazine has had two great theatre-related profiles now. I really hope they keep it up.