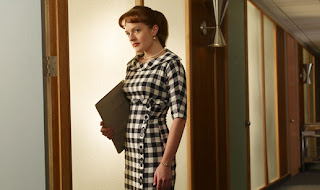 I love the television series Mad Men, about a New York City advertising agency in the 1960s, so I'm happy to hear that one of its stars, Elisabeth Moss, will make her Broadway debut in this fall's revival of David Mamet's play Speed-the-Plow.

On Mad Men, Moss plays Peggy Olson, the new girl in the secretarial pool at the Sterling Cooper ad agency. Her character is sweet and a little naive, but also ambitious, working her way up to junior copywriter in a very male-dominated world. She's also the source of a very big, and dramatic, surprise in the plot at the end of the show's first sesason.

On Broadway, Moss will be paired with the already announced Jeremy Piven, of HBO's Entourage, who'll also be making his Broadway debut, and Raul Esparza in the three-person play. Hopefully Esparza, being a Broadway veteran, will show them the ropes.

It's kind of interesting that two-thirds of the cast will be making their debut on the Great White Way, although both have off-Broadway credits. Moss made her stage debut in 2002, in Richard Nelson's Franny's Way. And Piven, whose parents founded the Piven Theatre Workshop, in Evanston, Ill., appeared off-Broadway in 2005 in Neil LaBute's play Fat Pig.

While they've made movies, Piven and Moss are probably best known for their television work. Before Mad Men, Moss played the president's daughter in The West Wing. And they're both playing characters in Speed-the-Plow that remind me a little of their current television roles.

In Speed-the-Plow, a caustic, satirical look at the movie business, Piven plays Hollywood production executive Bobby Gould and Esparza will be producer Charlie Fox. Moss will portray Karen, Gould's secretary. She'll be following in the footsteps of Madonna, who played the role on Broadway in 1988.

Here's a description from Playbill: "Speed-the-Plow focuses on two high-powered Hollywood executives, Charlie Fox and Bobby Gould, who have come up from the mailroom together," according to press notes. "Charlie brings Bobbie a surefire hit with a major star attached. Bobby seems certain to give the green light, until his beautiful new secretary gets involved."

I haven't read Speed-the-Plow, but Piven's character sounds like it might bear more than a little resemblance to Ari Gold, the frenetic, ruthless and hilarious Hollywood agent he plays on Entourage. I'm not sure how Moss' character compares with Peggy Olson, but my guess is that she'll be a very different type of secretary than she is on Mad Men. And I think the cast sounds pretty promising.

If you're not familiar with Moss, I highly recommend checking out Season 2 of Mad Men, which starts Sunday at 10 p.m. on AMC. If you want to catch up beforehand, Season 1 is available on DVD. Speed-the-Plow begins previews at the Belasco Theatre on Oct. 3.
Posted by Esther at 9:29 AM

I was so excited to hear this - I really liked Elizabeth Moss in West Wing and although I haven't seen Mad Men yet (I'm planning on renting the DVD's ASAP because it looks so good!) I've heard nothing but great things about her performance.

You know, I think I only saw West Wing a couple times, so I really wasn't familiar with Elisabeth Moss at all. (Although I've seen a few movies she's been in).

But Mad Men is great. They've really gone to great lengths to re-create 1960, from the detailed sets to the (hopefully) outdated attitudes in the workplace. It's so fascinating because you know that in a few years, the lives of these people, and America as a whole, are going to change. And you're seeing them at the moment before that change occurs.

I adore Raul Esparza! Haven't seen Mad Men but have heard great things about it.

I missed Raul Esparza's two previous Broadway appearances, "Company" and "The Homecoming," so I'd love to see this one. I really liked the first season of "Mad Men." It's so well done. Plus, I have a lot of interest in 20th century American history, and specifically in the 1960s. To me, it's a great portrait of America just before everything started to change. I love "Hairspray" for the same reason. There's still time to rent and watch Season 1 before Sunday night!