Getting out my dancing shoes 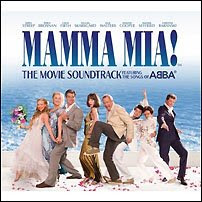 The movie Mamma Mia! doesn't open until July 18, but the soundtrack goes on sale today. If you want to join me in giddy anticipation, you can check out the Web site, watch clips, read interviews and put on your dancing shoes. Oh, and don't forget your bathing suit, a floppy hat and some sunscreen.

The film magazine Empire has a report from last week's British premiere. The movie's stars, including Meryl Streep, Pierce Brosnan, Colin Firth, Julie Walters, Stellan Skarsgard, Dominic Cooper and Amanda Seyfried, were there. Christine Baranski was otherwise engaged on Broadway, in Boeing-Boeing. (Speaking of Broadway, I would absolutely love to see Meryl Streep on stage.)

For the uninitiated, Streep plays former pop singer Donna Sheridan, who owns a hotel on a Greek island. Her daughter Sophie (Seyfried), is about to get married to Sky (Cooper). Sophie invites three of her mother's former lovers (Brosnan, Firth and Skarsgard) to the wedding, in hopes of figuring out which one is her father. Baranski and Walters play Streep's ex-bandmates. The whole thing is set to songs by the 1970s Swedish pop group Abba. Got that?

Here's the lineup for next week's talk shows:

In this interview with The Guardian, Streep talks about singing, dancing and doing splits for her role. "I just did the splits on instinct. That's what always happens with my acting. As an actor, you're not allowed to think."

Streep's introduction to Mamma Mia! occurred when she took one of her daughters and some friends to see the Broadway musical a month after the Sept. 11, 2001, attacks.

"They walked in and they sat there with their heads in their hands,'' Streep said. "Dimmed is the word - they were sad all the time, you know? The first part was really wordy, and then Dancing Queen started up. And for the rest of the show they were dancing on their chairs and they were so, so happy. We all went out of the theatre floating on the air. I thought, 'What a gift to New York right now'."

The show, which opened in London in 1999, had its first Broadway preview at the Winter Garden Theatre on Oct. 5, 2001. Last week, it played to a capacity audience in New York of 101.5 percent, with an average ticket price of $74.77. I tried to find out how many productions are playing worldwide, and it's a lot. Too many for me to count on both hands.

Judy Craymer, the producer who brought Mamma Mia! to the stage, talks to the Times of London about the show's origins. She was 23 and working for Tim Rice on Chess when she met half of ABBA, and had a hunch that their songs would work in a musical. “It won over the cynics, and people who don’t see themselves as Abba fans. They enjoy the story and being taken on a fun journey to the Greek islands.”

A New York Times article notes that "with the worldwide success of the original show, the appealing and high-profile cast, and the international, multigenerational Abba fan base, Mamma Mia! would seem to have huge box-office potential." But despite the recent mini-surge of movie musicals, there have been hits (Chicago) and misses (The Producers).

As popular as the musical has been, I think the movie could improve on it by opening up the dance numbers and adding some breathtaking scenery to the mix. Hey, when it's 90 degrees outside, I could spend a couple of hours in an air-conditioned gigantiplex listening to some ABBA tunes and being whisked away to a sun-dappled Greek island.

Speaking of ABBA, the group's official Web site has a story about bringing Mamma Mia! to the big screen, and the reservations early on that a movie would cut into the show's audience.

“It used to be that one wouldn’t make a film until ‘the stage musical has had its run’,” said band member Bjorn Ulvaeus, “but that rule has been abandoned these days. There doesn’t seem to be a particular timing that is exactly right, but there is plenty of evidence that the stage version benefits from a film version, no matter what kind of business the latter does."

The four members of ABBA - Ulvaeus, Benny Andersson, Anni-Frid Lyngstad and Agnetha Faltskog - attended the movie's premiere in Sweden. (By the way, Ulvaeus and Andersson have cameos).

Sadly, there's no chance of a reunion tour. "We will never appear on stage again," Ulvaeus told the Telegraph newsapaper. "There is simply no motivation to re-group. Money is not a factor and we would like people to remember us as we were, young, exuberant, full of energy and ambition."
Posted by Esther at 12:17 AM

Thanks for this great post about what is unequivocally my biggest, most delicious guilty pleasure in theatre.

Back in October 2006, I wrote about the 5th anniversary of Mamma Mia! on Broadway. I wrote, in part:

"My first opportunity to see Mamma Mia! came on September 1, 1999 at London's Prince Edward Theatre (current home to Jersey Boys), not long after it opened on the West End. I recall being downright delirious thanks to the energy of the original cast and particularly Jenny Galloway, who walked away with a much-deserved Olivier Award. She's the one who got to sing 'Take A Chance On Me.'

"But of course, at the heart of Mamma Mia! is the surprisingly enduring affinity for the music of Anni-Frid Lyngstad, Benny Andersson, Björn Ulvaeus and Agnetha Fältskog, who together comprised one of the world's best-selling recording groups of all time. Twenty years before I first saw Mamma Mia! I actually went to an ABBA concert during their 1979 "Voulez-Vous" tour of the United States (some have told me that was their only American tour) -- I can still remember it, oh so vividly, as Agnetha waved to my friends and me. Of course, it wasn't cool to love ABBA back then, but I'm thrilled to this day that I have bragging rights to being among the relatively small minority of Americans who can say they've seen them perform live in person."

Now, nearly nine years after first seeing Mamma Mia! on the London stage, I can't wait to take in the film version. I've already had a chance to hear Meryl Streep sing in the 2006 Public Theater's Central Park production of Mother Courage And Her Children. I think she will pleasantly surprise many a moviegoer!

Thanks so much for the excellent preview!

Steve,
Thanks so much for the excellent comment! I tried to round up as much Mamma Mia! movie news as I could find. Hope I didn't go on too long. I do have tendency to do that.

I'm really looking forward to Meryl Streep's singing. I would love to see her on stage. She is such an amazing actress over an incredible range of roles in her career. And don't forget, be on the lookout for Benny and Bjorn's cameos.

I love hearing about your experiences with Mamma Mia! and ABBA. You definitely have bragging rights. The concert must really have been something. To me, you'll always be one of the cool kids!

And I'm so glad you suggested Mamma Mia! when I was trying to fill my last two slots in last summer's Broadway musicals marathon. It's such a fun show and it was a great start to my visit. Plus, everyone needs at least one theatre guilty pleasure.

The movie posters just popped up everywhere we've been here in (Netherlands, Belgium, Germany) and all opening on the 17th (damn. a day earlier!) and I'm getting VERY excited!!!

I know. It's my guilty pleasure musical too. Its cheese but knows it and runs with it!

Hey Vance,
I'm glad you're excited, too! There's nothing wrong with being swept up in an entertaining story for a couple of hours, and that's exactly what Mamma Mia! does. If only all shows did it so well.