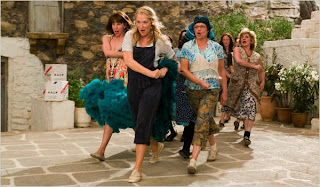 I don't think I'll be going to see the new Batman movie, The Dark Knight. Maybe I'll catch up with it in a few months, when it comes out on DVD. Maybe. It just looks too intense and violent for me. Plus, I'm not really a comic book fan. And when I see Heath Ledger's scary, twisted face as The Joker it just makes me cringe. I know his final performance is getting tons of praise. But it seems unbearably sad to watch someone so young on the big screen who's recently passed away, and in such tragic circumstances - from an accidental drug overdose.

It's finally here! Mamma Mia! opens nationwide today! I will be going to see the summer 2008 entry in the revitalization of the movie musical. It's only going to be about 95 degrees this weekend. Is there a better way to spend a couple of hours than sitting an air-conditioned movie theatre and being transported to a Greek island - with fun ABBA tunes? Plus, I'm sure there'll be another terrific performance from a singing and dancing Meryl Streep, arguably America's greatest living actress.

In addition to musicals, I'm a huge documentary fan, and I just read about a new blog devoted to the genre called Docsider. It's written by Mark Rabinowitz, one of the founders of Indiewire, which provides news and networking on the subject of independent films. So far, Docsider has only a few posts, but as someone who likes to keep track of what's going on in the documentary world, including upcoming releases, it could be a great resource.

And finally, Marc Shaiman is pretty high up on my list of personal musical theatre gods. There's just something about the catchy pop tunes that he and Scott Wittman wrote for Hairspray, the way they captured America in the early 1960s, that I find irresistible. A few weeks ago I saw South Park: Bigger, Longer & Uncut. It really was hilarious, a great satire, and I loved Marc's songs. So I'm happy to hear that he's writing the score for a new movie, Bob: The Musical, about a thirtysomething self-proclaimed musical theatre hater who wakes up one morning to find out that his whole life has become a musical. Sounds like fun!
Posted by Esther at 12:32 AM

I love Shaiman, but I don't think he's quite at the "musical theatre god" status yet.

Ok, maybe I was exaggerating a bit. Although I did say he was one of "my" musical theatre gods. ;-) But you're right, he probably hasn't attained that heavenly status quite yet. I guess he's got a few more musicals to go.

I saw Mamma Mia! on stage last summer as the opening show of my seven musicals in five days Broadway marathon. And it was the perfect way to begin - just lots of fun, lots of energy but also kind of poignant.