I've been waiting for Godot 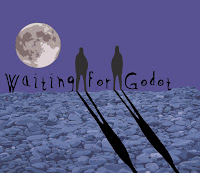 For some reason, when I was a teenager I became especially fascinated with the theatre of the absurd. I read up on playwrights like Eugene Ionesco and novelists like Albert Camus. (You can see where this is leading - the futility of human existence. Even thinking about it now makes my head hurt.)

I don't know why I was so interested - absurdist plays often don't have much of a plot. I could never really figure out what they were about, although I guess I must have enjoyed trying. Maybe I found something appealing in the very fact that they were incomprehensible. Okay, I was a little intellectually pretentious, I know. Maybe I was searching for the meaning of life. (Unfortunately, I never found it, so if you know what it is, please share.)

Luckily, I didn't take my infatuation too far. I never started wearing a beret or carrying around volumes of Sartre or smoking Gauloises. Although I did read Simone de Beauvoir's The Second Sex and I once went to hear Eugene Ionesco speak in Boston when I was in college and got his autograph. I think I lost interest soon after that. I haven't read or thought about the theatre of the absurd in a long time. I'm still game for a challenging work but now, I like plot - lots of plot.

Of course, the most famous absurdist play is undoubtedly Waiting for Godot, by Samuel Beckett. A poll of 800 playwrights by Britain's Royal National Theatre named it the most significant English-language play of the 20th century. (Never mind that it was written in French!) I first came across the title while reading Notes On a Cowardly Lion, John Lahr's excellent biography of his father, the actor Bert Lahr, who appeared in the 1956 Broadway production of Waiting for Godot.

While I did read Waiting for Godot a long time ago, I've never seen it performed. In fact, for all of my youthful curiosity, I'm not sure I ever saw any theatre of the absurd performed. How absurd is that! (This was before VCRs and DVDs remember. I didn't have many options). I guess, like Vladimir and Estragon, the play's two main characters, I've been waiting.

So I was pretty excited when I read an article in Playbill yesterday about a Broadway revival of Waiting for Godot slated for 2009. (Whenever I think of Godot now, I think of that line from the song "It's a Business" that producer Carmen Bernstein sings in Curtains: "He mounted Samuel Beckett, I don't mean it like it sounds.")

Steve on Broadway has a terrific preview of the production and the history of Waiting for Godot on the Great White Way. For more background, you can listen to a discussion about the play that aired on the radio program On Point in 2003, the 50th anniversary of Waiting for Godot's Paris premiere.

As for me, I'm just hoping that after all these years, I'll actually have a chance to see some theatre of the absurd on stage. I can hardly wait!
Posted by Esther at 12:17 AM

I realized that I have never seen any of the theatre of the absurd either. In fact, I think I have only ever read it. And, admittedly, a lot of it was over my head at the time. Maybe I should try re-reading some of them now. One of my personal favorite was always Rosencrantz & Guildenstern Are Dead.

I would be very interested to see this new production of Godot.

Yeah, I think a lot of what I read was (and probably still is) over my head. I think I read Rosencrantz & Guidenstern in high school. After sitting through "Rock 'n' Roll" on Broadway, I can't say I have a great desire to revisit Tom Stoppard. Perhaps once was enough!

For me, what makes Godot so fascinating is that it's open to so much interpretation and endless discussion about what it means. Or, it may mean nothing at all. Who knows?!