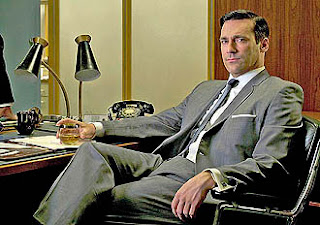 Tonight at 10 on AMC, it's the premiere of Season 2 of Mad Men, my most favorite summer television series ever!

If you're of a certain age, doesn't the idea of summer television strike you as, well, odd? When I was kid, back when there were only three channels and a very fuzzy PBS station that you could maybe tune in if you fiddled with the rabbit ears, summer meant only one thing - reruns. Now, there's an entire summer television lineup. Entertainment Weekly even had a summer television preview issue. Progress!

Granted, there's not always a lot of drama in this drama about life at Sterling Cooper, a second-tier Madison Avenue advertising agency, circa 1960. The big secret that ad executive Don Draper, played by Jon Hamm, was hiding didn't seem all that interesting when it was finally revealed.

Still, I'm fascinated by Mad Men. It's such a stylish, faithful look at a an era in the not-too-distant past. It's a time that we may even remember a bit of from our own childhood but now look back on in horror - the smoking, the sexism, the racism, the lack of things we take for granted today, like seat belts and microwaves.

I feel almost giddy with anticipation knowing how much the lives of these characters will change over the course of the next decade. How will they cope with the advent of the civil-rights movement, the women's movement, the antiwar movement, affirmative action and free love? We're looking at America on the cusp of change and I wonder who will adapt and thrive, and who will fall off the edge.

Alex Wichtel wrote in the New York Times magazine about spending three days on the set of Mad Men. Creator Matthew Weiner says that he chose advertising as his subject because “it’s a great way to talk about the image we have of ourselves, versus who we really are. And admen were the rock stars of that era, creative, cocky, anti-authority. They made a lot of money, and they lived hard.”

Season 2 takes place in February 1962, 14 months after the Season 1 finale. At the television critics press tour earlier this summer, Weiner said "I honestly felt that picking up the story right after the finale was limiting. It would've really turned it into more of a soap opera than I would want it to be. " Weiner told the critics that he wants the show to be in 1968 by Season 5.

Finally, in a very clever spoof, Advertising Age designed vintage 1960 issue featuring Mad Men. Here's one story that made me smile: Sterling Cooper wins Kodak Projector Account." Apparently, Kodak was getting ready to launch a "revolutionary new technology" in slide projectors dubbed "the wheel," a removable circular tray for holding slides and dropping them into the projector.

Revolutionary new technology? I had no idea! I just happen to have a Kodak projector sitting all-but-forgotten in the back of my closet. I bought it to show off the 700-plus slides I took during my trip to Europe the summer after I graduated from college. Sadly, very few of my friends ever wanted to see them. And if you want one today, you're out of luck. Kodak stopped making slide projectors in 2004.
Posted by Esther at 9:33 AM

My friend Hollie has been urging me to check out this show. Ah, so many shows and movies, so little time!

Robin Givhan of the Washington Post recently wrote an article about Mad Men that might interest you. Then again, she's kind of a twit, so perhaps not.

Thanks for the link. I read an article where someone joked that Mad Men has had more stories written about it than it has viewers. ;-)

I just watched the season premiere. I'm kind of a sixties buff, so what I enjoy most are the social and cultural references. Like tonight, the office got its first copy machine, and they can't quite figure out where to put it. One of the secretaries says, in amazement, that someone she knows actually made party invitations on one - in color. Imagine that!

Plus, you can see how the beginning of the youth culture is affecting the ad agency. And, they showed everyone watching Jackie Kennedy's White House tour on tv!

We dvr'd it last night so that we could watch it this week. I saw the "best of..." earlier in the day which talked about the prior season so I'm definitely intrigued. Love Vincent K. who plays Pete too.

Saw your comment on Chris C.'s blog that you're planning on seeing Topol next year in "Fiddler on the Roof" - that one is on my list too!

Hey Margo,
I think the whole cast is great. You're right about Vincent Kartheiser. He's so slimy and he has such perfect sense of WASPY entitlement.

I'm very excited about seeing Fiddler on the Roof with Topol. I saw him in Fiddler 10 years ago, when I was living in Israel. Needless to say, since it was in Hebrew, I missed a lot!