The Seinfeld finale at last 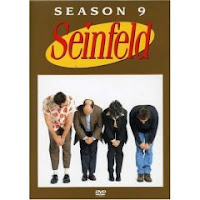 Okay, I know I'm a little late with this - 10 years and nearly 2 months late, actually - but I've finally seen the final episode of Seinfeld, which finished up its nine-year run on May 14, 1998. An estimated 76 million people tuned in to NBC that Thursday night, making it the third most-watched sitcom finale in television history, behind M*A*S*H and Cheers. I was living in Israel when the last season aired, so I never got a chance to watch it.

Although Season 9 was released in November, and I've had it for a few months, I've held off watching it. I guess I just wanted to keep the sense of anticipation going a little longer. In the last episode, a two-parter, the idea for a televsion series about "nothing" that Jerry and George came up with years ago gets picked up by NBC. The network offers them a trip anywhere they want on the corporate jet, so Jerry, Elaine, George and Kramer head for Paris.

Unfortunately, the plane has to make an emergency landing in the small (fictional) Massachusetts town of Latham, where the foursome are arrested for violating the "Good Samaritan" law after they stand by and watch while a man is being carjacked. They wind up in jail and go on trial. Their lawyer is the fast-talking and nattily attired Jackie Chiles, played by Phil Morris.

The prosecutor calls a parade of witnesses who've appeared in past episodes to testify that the foursome's lack of character wasn't an isolated incident. (The Bubble Boy, the elderly woman Jerry fights for a loaf of rye bread, Elaine's old boss Mr. Pitt, George's old boss George Steinbrenner, all make appearances). It was funny, but the whole thing went on a bit too long.

I had kind of mixed reactions to the finale. For one thing, John Pinette, the standup comedian who plays the carjacking victim, is morbidly obese. It was kind of uncomfortable watching the four of them standing across the street while this is going on, making fun of his plight. (Kramer's even videotaping it).

The way they reacted just seemed out of character for them. Whatever Jerry, Elaine George and Kramer were, they were never intentionally cruel. Clueless - yes, thoughtless at times - yes, wacky - often, but not mean-spirited the way they appear in this episode. They're basically good people, and I don't believe for a second that that their characters would have reacted in such a callous, uncaring way. (Well okay, maybe George would have).

Still, there were some good moments and I did laugh. There's a conversation between Jerry and George that reprises their very first conversation, so it's a fitting way to come full circle. And I liked the standup routine that closes out the episode, with Jerry now in his bright orange prison jumpsuit.

One thing I've realized after watching all 175 episodes is that although it's called Seinfeld, in many ways Jason Alexander's George Costanza is the best character and the heart of the show. (There's nothing funnier than watching George interact with his parents, the wonderful Jerry Stiller and Estelle Harris.) That's not surprising, considering that George is modeled on series co-creator Larry David.

Sure, I love Jerry Seinfeld, Michael Richards and Julia Louis-Dreyfus. But George is the one who seems to get into the wackiest, most outrageous situations, to which the other characters are often reacting. He's constantly coming up with some kind of scheme that almost always ends badly. (A sitcom staple since I Love Lucy). He's constantly getting tripped up in his own lies. He's lovable loser who can never quite seem to get his life in order.

I've bought every season of Seinfeld as it came out on dvd - something I've never done before with any television series, and I've really enjoyed them. I probably remember more quotes from Seinfeld - "yada, yada, yada" and "not that there's anything wrong with that" come to mind - than from any other tv series.

Sure, there were some episodes where I laughed more than others, but really, there were plenty laughs in every season - right up until the end. In my opinion, Seinfeld is one show that never jumped the shark. And honestly, now that I've finished watching, I could start over again from the beginning.
Posted by Esther at 1:10 AM

the last episode was a definite let down. it's a good thing one rotten egg didn't spoil the other 174.

I thought the final episode was brilliant, and very funny. So what if it ends badly for the characters - it's all silly nonsense anyway. Make up your own ending.

Thanks for the comments, anonymous and K.D.

I didn't mind so much that things ended badly for the characters. I think my biggest problem with the last episode is that the actions of Jerry, Elaine, George and Kramer seemed so out of character for them. They were funny and clueless at times during the series, but never mean-spirited. And that's the way they appeared when they just watched and laughed as the guy was being carjacked.