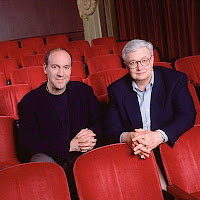 I'm a little sad that At the Movies as we know it is ending. I guess it was inevitable. Roger Ebert's health problems have rendered him unable to speak for the past two years. Ebert and cohost Richard Roeper both announced this week that they're severing ties with the show. Ebert told the Associated Press that Disney-ABC, the distributor, had decided to take At the Movies "in a new direction."

I started watching Gene Siskel and Roger Ebert (pictured above in their heyday) in 1977, when their movie review program that aired on PBS out of Chicago went national. I was drawn in by their often sharp-edged give and take, and their passion for the movies. Maybe they were unlikely-looking tv stars, but they became a hit. Back then, it was called Sneak Previews, and it was the first show of its kind. In 1982, Siskel and Ebert left Sneak Previews for a new show on commercial television that became At the Movies.

Siskel, a writer for the Chicago Tribune, died in 1999 of complications after surgery for a brain tumor. Eventually Roeper, Ebert's colleague at the Chicago Sun-Times, joined him as a permanent replacement in the balcony. In Ebert's absence, Michael Phillips of the Tribune has been paired with Roeper after a series of fill-in cohosts that included the Tonight Show's Jay Leno, filmmaker Kevin Smith and New York Times critic A.O. Scott.

You can read Ebert's reminiscences about the show here. Chicago magazine has a 2005 profile of Ebert online. Time magazine offers a brief history of At the Movies and the dispute between Ebert and Disney.

Part of the attraction of At the Movies was that Siskel and Ebert made such a great team. They seemed like two regular guys, although maybe a little wittier and more knowledgeable than your average film fan. Their reviews were concise, perceptive, witty and blunt. And it was so much fun to watch them argue. They brought film criticism to the masses in a way that was understandable and enjoyable. They helped make us all critics.

Personally, I think the show lost a lot of its zing after Siskel died. Roeper's a nice enough guy and he does a good job, but after Siskel, At the Movies never again had the same kind of edge. Every pairing since then - Ebert with other hosts, Ebert and Roeper together, Roeper with others, just hasn't had the same quality. They're more like polite conversations than the real, heated discussions between two movie lovers with differing opinions.

Writing in the Los Angeles Times, Patrick Goldstein argues that Siskel and Ebert's television success was somewhat of a fluke. "Siskel and Ebert, though trained as ink-stained wretch newspaper men, turned out to be a great showbiz buddy team, the film-critic version of Jack Lemmon and Walter Matthau. They had a chemistry on screen that transcended critical heft."

Disney-ABC has already chosen replacements for Ebert and Roeper. Variety reported that E! Entertainment critic Ben Lyons and Turner Classic Movies host Ben Mankiewicz have been tapped as the new hosts when the program's 23rd season begins the weekend of Sept. 6. Lyons is the son of Jeffrey Lyons, ironically one of the critics who replaced Siskel and Ebert when they left Sneak Previews. Mankiewicz' grandfather, Herman Mankiewicz, was a Hollywood screenwriter who won an Oscar for Citizen Kane.
I have to admit that I've never heard of Ben or Ben. I just hope the show retains its wit, its intelligence, and doesn't degenerate into mindless gushing or cheerleading for Hollywood. But I'm willing to withhold judgment. I'll wait until their debut in September before giving them my own personal thumbs up or thumbs down.
Posted by Esther at 12:17 AM

I'm gonna miss Ebert and Roeper as well. Actually we've been missing Ebert for quite a while now. I did love Kevin Smith filling in, though. Every time I see him, he says something so smart, I love him a little more.

I also miss Gene Siskel. I usually agreed with his taste and reviews more than Ebert. The best part of the show was when they would totally disagree on a review and start arguing. Too funny.

Yeah, I agree that Siskel and Ebert's arguments were the best. That pairing was pretty unique. They just had a certain rapport that no other movie review duo has been able to replicate.