How Does the Show Go On? 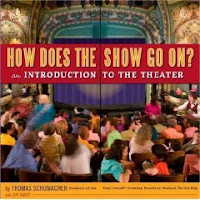 I love this book. I saw it while I was perusing the merchandise during intermission at The Lion King on Broadway. (And Disney is the king of merch). I hesitated because I thought, "Oh, it's for kids." But when I got home, I cashed in some of my Borders bucks and bought it.

Anyway, How Does the Show Go On?, by Thomas Schumacher, president of Disney Theatricals, and Jeff Kurtti, creative director of the Walt Disney Family Museum, is a great book about the theatre for a young audience (or kids at heart, like me). If you're going to take home a souvenir from a Disney show, this is a great one.

What I love is that it's so well put-together and filled with information. The text is written in a very breezy, conversational style - easy to understand without talking down to its audience. The book is printed on heavy paper and lavishly illustrated with pictures from Disney productions. Plus, there are cool extras, like an opening night Playbill, sample ticket and costume sketches from The Lion King. It's a pop-up book for theatre lovers!

Schumacher and Kurtti cover the basics - including the different kinds of theatre - Broadway, off Broadway, regional, summer stock, touring companies - and the kinds of stages - black box, proscenium, thrust, amphitheater. (I didn't know that the Romans built amphitheaters because their bowl shape holds sound so well, but now that I think about it, it does make sense).

They also do a great job of taking the reader through the whole process of creating a show and all of the people it takes to put it on once you get to opening night. And they don't simply focus on the obvious - the actors and musicians - they also go behind the scenes to describe putting together the costumes, sets, makeup, props and special effects. (Personally, I did not know that the flyman was in charge of pulling the ropes to make sure that things go up and down).

True, a lot of the information in How Does the Show Go On? I already knew. But even when the authors are describing the basics, like the dressing room, they find a way to give the reader a little added value. For example, when Yul Brynner toured the United States in The King and I, his dressing room in every city had to be painted a specific color of brown. Who knew?

And I didn't realize that there are four actors inside the elephant that parades down the aisle in The Lion King. (Okay, I guess that should have been obvious. An elephant does have four legs, after all.) After making its exit, the elephant is stored 15 feet in the air over the stage because it's too big to fit anywhere else. I don't know about you, but I love those kinds of details.

Amid all of the details, they spice things up with interesting tidbits about the shows. For example, Stephen Mear, a choreographer for Mary Poppins, has a close friend who's deaf. The idea for choreographing "Supercalifragilisticexpialidocious" came from his experience with sign language.

You could sit down and read How Does the Show Go On? from cover to cover, but I like just keeping it on my coffee table and picking it up every once in awhile to flip through the pages, look at the pictures and soak up some more theatre lore.

It's easy to read a book like this and think, oh this is something I could never do, so I like the way the authors include plenty of advice on how kids can put on their own backyard productions. I wish I could give a copy to every 12-year-old, and then encourage them to round up some friends and put on a show of their own. I wish I were 12 again so I could do it.
Posted by Esther at 11:53 AM

I'm going to have to check out the book - it sounds great!

A lot of the stuff in it is pretty basic but it's presented in such an interesting, appealing way by authors who clearly love the theatre. And like I said, I did pick up little things I didn't know. You really do get the sense that it takes a village - or more like a small city - to put on a show.