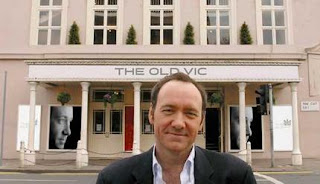 If you asked me who first sparked my interest in theatre, I'd have to say that it's Kevin Spacey, who turns 49 years old today.

Way back in 2005, I watched Kevin sing and dance his heart out in Beyond the Sea, the Bobby Darin biopic. While it didn't get great critical acclaim, the movie was a true labor of love for the two-time Oscar winner, who also directed. I loved the movie, too, especially Kevin's singing.

I bought the soundtrack and listened to it pretty much nonstop for months. There was just something about Kevin's voice that really got to me. In fact, I did something I've rarely done in my life - I wrote him a fan letter in care of The Old Vic Theatre in London, where he serves as artistic director. And to my utter surprise, a few months later I received a short but very sweet personal note from Mr. Spacey.

Well, as you can imagine, Kevin pretty much vaulted his way to the top of my list of favorite actors. I caught up on all of his movies and television talk-show appearances, read every interview with him that I could find. In every interview what came through strongly and clearly was Kevin's love for the theatre. You couldn't help but catch some of his enthusiasm.

Here's a small sample of what I mean, from an interview with the British publication The Stage: “You get to come in every day and experiment and then you get a chance to get up every night and work on a different part of your game. I just happen to love the thrill of that - the high-wire act of it and the ritual of it. I love the ritual of coming into the theatre every night and working with the same people, creating a family, because everyone’s up for it."

Even though I hadn't been to a play or musical in years, Kevin's passion for the theatre made me want to give it a try. He made the experience sound positively thrilling. After that gracious note, I figured it was the least I could do for him, especially since there was no chance I'd get to London to see a show at The Old Vic.

I decided to go see the next play that the Trinity Repertory Company was putting on, which happened to be Hamlet. Kind of funny now that I think about it - the last show I saw before Hamlet was Fiddler on the Roof in Israel, in Hebrew. Two classics, both a little difficult to understand, but I had a great time seeing both of them.

And when Kevin announced in November 2006 that he'd be bringing the Old Vic's production of A Moon for the Misbegotten to New York the next spring, I knew I had to make my first trip to Broadway. Soon, I found Steve on Broadway's blog and the rest, as they say, is history.

I watched Kevin last night on The Tonight Show. He was as witty as ever, doing impressions of Bill Clinton and Johnny Carson, talking about his Emmy nominations, his work on the HBO movie Recount and playing opposite Jeff Goldblum in Speed-the-Plow in London.
He told a funny story that I'd heard before, about forgetting his lines one night during a performance of Lost in Yonkers on Broadway, for which he won a Tony award.

So happy birthday, Kevin - and come back to Broadway soon!
Posted by Esther at 12:07 AM

I'm a big Kevin Spacey fan. Loved him in The Usual Suspects, American Beauty and L.A. Confidential. Oh, and let's not forget The Ref!

I wasn't all that enamored with Beyond the Sea--but I thought he did a smash up job as a song and dance man! According to Ebert & Roeper, his Bobby Darin was even better than Bobby Darin! I bought the soundtrack and his renditions of Beyond the Sea and Mack the Knife pop up now and again on my iPod.

I love The Ref! I agree that what I liked best in Beyond the Sea was Kevin's singing and dancing. Plus, it was so gracious of him to answer my card. It's so great when someone is a nice person as well as a talented performer. And it was such a thrill to see him on stage, to be only a few feet away from him. I think I was in shock!