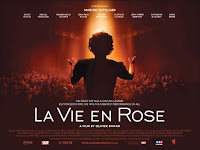 Over the weekend, I watched La Vie En Rose, the biopic of French singer Edith Piaf, starring Marion Cotillard in her Oscar-winning role.

Normally, I'm not that big on 2 hour and 20 minute movies with subtitles. It's just too hard to multitask while I'm watching them. This is the kind of movie I'd add to my Netflix queue and then keep moving it down, intending to watch it someday. Well, I've been a little neglectful of my queue. It popped up at the top and I got it in the mail!

Despite what I just said about subtitles, I do enjoy a good biopic, especially if the subject is someone I've heard of, but don't really know all that much about. And I didn't really know anything about Piaf, except that she had a beautiful voice, a short, tragic life, and while she was wildly popular in France, she never quite enjoyed the same degree of adulation in the United States.

Director Olivier Dahan does a great job at portraying the horrific conditions of Piaf's childhood: she was neglected by her drunken, poverty-stricken mother and lived for awhile with her grandmother, who ran a brothel. As a small child, an illness rendered her blind for a time. Eventually she was reclaimed by her father, who made his living as a circus contortionist.

In her 20s, she was singing on the streets of Paris for small change, where she was discovered by a nightclub owner, played by Gerard Depardieu. He gave her some training and put her on stage. Eventually she got a new last name, piaf, which means sparrow, and a new image - dressing in black.

Cotillard portrays Piaf from her 20s until her death in 1963 from cancer at age 47. But a toll of drinking and drugs (she became addicted to morphine after a serious car accident, and survived two more crashes) and the ravages of her fatal illness made her look about 20 years older.

The structure of La Vie En Rose can be kind of confusing - we're constantly moving back and forth in time between Piaf as an adult and as a child. (Why can't someone just tell a story from start to finish?) Important parts of her story are told quickly in a flashback at the end of the movie, as she's dying. For example, we don't find out until the very end that Piaf had a daughter, who died of meningitis at age 2. We don't even learn some basic facts, such as how many times she was married.

And I don't think the movie even mentions World War II. (Some considered Piaf a traitor for performing at social gatherings for German forces in occupied France. Following the war, she claimed she had worked for the French resistance.)

But Cotillard delivers a memorable performance in showing us Piaf's rather chaotic, at times reckless life. We see her transformed from a savvy street kid to a polished performer with tremendous stage presence. Piaf was a determined, strong-willed woman who overcame horrible deprivation using the one gift she had - her voice. Plus, Cotillard just looks right for the role: small and delicate, with huge eyes.

I was very surprised when I read that Cotillard didn't actually do very much of the singing in the movie. Most of the time she's lip-synching while a French singer named Jil Aigrot does the actual performing. But apparently, Cotillard spent a great deal of time getting down Piaf's on-stage mannerisms.

At the conclusion of the movie, after watching all of the horrible things that happened to Piaf in her life, it was thrilling to hear her signature song - "Non, Je Ne Regrette Rien" (I regret nothing) - as a moment of triumph.
Posted by Esther at 1:36 PM

I thought Cotillard was wonderful in this. I watched it a few months ago. Like you, I really didn't know much about Piaf before it.

Apparently, she (Cotillard, not Piaf, obviously) has signed to the film adaptation of Nine, playing Luisa. This excites me, because I really like the musical.

Esther, I loved Cotillard's performance. Her metamorphosis was amazing.

But I found the structure of the film frustrating and annoying. I have no issue with flashbacks, but I think the direction could have been better.

Olivier Dahan created LA VIE EN ROSE for a French audience. The Piaf story is well known in France; they already know how many times Piaf was married, her Resistance work getting soldiers out of German POW camps, how she made a star of Yves Montand and others. They KNOW all that; they didn't need to be told about it. Dehan and Cotillard have said many times they wanted to create an emotional life and biography. That's what has made so many people in so many countries LOVE this film; it hits on an emotional level. And of course Cotillard is brilliant, as usual. Americans always want their stories told chronologically. That's not the only way to tell a tale, and don't expect the young European film-makers to follow our rather stuffy literary forms jut because we don't know the subtext or background. Finally, Cotillard was lipsynching PIAF, not Jil Aigrit, who sang the Piaf songs either not recorded or on discs so old they couldn't be recreated.

Dorian,
Thanks for the information on Nine. I knew there had to be a theatre connection somewhere! I've never seen the musical, so I'm looking forward to the movie.

Steve,
I definitely agree about Marion Cotillard's performance. Her transformation was amazing. I'm not opposed to flashbacks per se, but in this case, I don't know. I guess I felt like there was a little too much switching back and forth between past and present. But it's still a very enjoyable movie. In addition to Cotillard, I liked the actresses who played Edith as a young girl. Those scenes were very moving, and heartbreaking.

Kit,
Thanks very much for your comment! You do make a good point, that French audiences already know most of the details about Edith Piaf's life. While I don't always need to have a story told chronologically, in this case, I felt that some of the details, like the fact that Edith had a daughter, were just kind of thrown at us at the end of the movie. And thanks for correcting me on who is lip-synching whom. I wanted to give proper credit, but I guess I got a little confused! And the movie did hit me emotionally. Like I said before, I thought Cotillard was wonderful. And I think I need to put a few Edith Piaf songs on my iPod!

As I pointed out, flashbacks are fine. And some of my personal favorite stories are told in varying ways, including The Last Five Years, Merrily We Roll Along, "Michael Clayton" and "Memento" to name just a few.

But the way Olivier Dahan skipped around in the life of Edith Piaf was jarring, and if one wasn't paying attention to Cotillard's make-up du jour, it would have been far too easy to think some scenes were meant to be chronological.