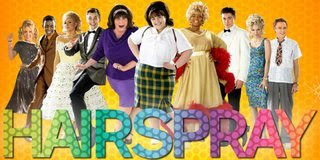 Apparently we have not heard the last of Tracy Turnblad. New Line Cinema, which produced the movie version of the Broadway musical Hairspray, has asked John Waters to write a sequel. The plot is supposed to pick up the story of Tracy and her family in Baltimore in 1962, after the resolution of the first movie, in which they help integrate a teen dance program, the Corny Collins Show.

Director Adam Shankman told Variety: "I never thought of musicals as franchises, but it certainly worked with High School Musical, and the idea of working with that cast again, and creating new material and music, is a dream come true."

The first Hairspray, which came out in 2007 and was based on Waters' 1988 movie, did pretty well at the box office, earning more than $200 million worldwide. Sales of the DVD and soundtrack have also been strong. Plus, it got pretty good reviews. Metacritic gave it a total of 81 out of a possible 100 points on the critical acclaim scale. It's nice to see a movie musical be considered a commercial and critical hit.

The studio is aiming for a release in July 2010, and is hoping to snag the same cast, including John Travolta, Christopher Walken, Michelle Pfeiffer, James Marsden, Zac Efron, Amanda Bynes, Queen Latifah and newcomer Nikki Blonsky as Tracy. Although according to Variety, none of the actors had a sequel clause in their contracts.

For me, even more important than the cast returning is the news that Marc Shaiman and Scott Wittman are going to write new songs for the sequel. The score of Hairspray is one of my all-time favorites. (Plus, I was thrilled to actually meet Scott Wittman in New York in May, and he is a very sweet, gracious man).

Writing partners Shaiman and Wittman, who have also been life partners for more than 25 years, created some brilliant, catchy tunes. Songs like "Good Morning Baltimore," "The Nicest Kids in Town," "You Can't Stop the Beat" and "Run and Tell That" perfectly capture the spirit of 1962. Plus, "I Know Where I've Been" is such a great civil-rights anthem, it sounds like it could have been written in the '60s.

Besides the music, of course, two other big reasons for the appeal of Hairspray are its compelling story and its unforgettable characters. Because I love the original so much, I'm really excited about a sequel. But I think that this is uncharted territory. I mean, musicals don't usually have sequels, do they? Will John Waters be able to come up with a plot that's as dramatic? After you've integrated The Corny Collins Show, what can you do for an encore?

Update: One of the cool things about Marc Shaiman is that he keeps in touch with his fans through the Broadway World message boards. (Yes, they're a guilty pleasure. I'm addicted to them). Here's what he had to say today about the prospects for a Hairspray sequel:

"They've simply hired John Waters to write a treatment. That is like a marriage proposal (and an exciting one), but it is not a birth announcement. But, ya' have to admit, it's impressive that the movie studio actually came to the creators (of the film) to do this. That is practically unheard of in Hollywood (think GREASE 2). And Lord knows Scott & I could write songs for these characters (and any new ones John Waters dreams up!) for the rest of our lives."

Oh musicals have sequels... And they usually don't turn out so well. Reference Annie Warbucks, Bring Back Birdie and The Best Little Whorehouse Goes Public...

This is different because it is a movie musical sequel. Same thing though... Did you see Grease 2?

I'm not holding out hope on this one.

Thanks for the list Alicia. Luckily, (or unluckily) I never saw Grease 2, or any of the others you mentioned.

Yeah, I agree that the prospects for Hairspray 2 are kind of iffy. I have a hard time imagining a plot that could be as dramatic and compelling as the original. (Tracy goes to Woodstock?)

But I did add Marc Shaiman's comment from today on the Broadway World message boards where he said that he and Scott could write songs for these characters for the rest of their lives. I'd love to hear what they come up with!

First off: thanks for commenting on my blog! I appreciate it.

Now, onto my thoughts. HAIRSPRAY THE SEQUEL?! Forgive my saying this, but I actually did not like the film. Having never seen the stage production, and without any basis for comparison, I should have liked it. But maybe that's why I didn't? I don't know.

Anyway, while I had been impressed with the performances of the cast, I just thought that it was too...sparkly? yes, that's my excuse, but I don't know, I think perhaps it's the cynical NYC girl in me, but I think all the perkiness just put me off.

So I realllllly hope HS2 doesn't happen. As Alicia stated, Grease 2 did not fare so well...

Welcome, Artist Formerly Known as Jess! Thanks for stopping by.

I really love Hairspray, but then I've always been interested in the 1960s. I saw the original movie years ago, and then I saw the musical on tour last year. And of course, I've now seen the movie musical.

Yes, it's perky, but it tells a very important story about American history in a way that's compelling and accessible and entertaining, powerful without being preachy.

Plus, I like the fact that it's a truly integrated musical. The African-American characters aren't there as tokens, they're integral to the plot.

Finally, I have a big weakness for catchy pop tunes!