Passing Strange will pass into history 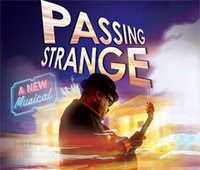 So, I guess this was inevitable, given its lackluster box office: Passing Strange, the musical about a search for "the real," now playing at Broadway's Belasco Theatre, is closing July 20.

I had mixed feelings about the show. Don't get me wrong, there's a lot to love in this musical about a young African-American man's journey of self-discovery that takes him from Los Angeles, to Amsterdam, to Berlin, all set to a rock 'n' roll beat. (Which actually, for me, was a bit loud at times!) While I liked Passing Strange a great deal, and I wouldn't have missed seeing it for anything, I think that way down deep, I respected and admired it more than I truly loved it.

Stew, who received the show's sole Tony award, for the book of Passing Strange, has written some very witty, insightful dialog about race, about family, about finding your place in the world. I love the way the show is structured as a kind of homage to The Wizard of Oz. And Daniel Breaker, who plays Youth, is amazing. Really, I love the entire cast, most of whom play multiple characters Youth meets at various points on his journey.

I also think it's great that this year we have two shows, In the Heights and Passing Strange, in which Latino and African-American artists are telling their own stories, in their own words and music. For me, the thing that's so great about Broadway is that there are so many voices, so many different experiences, represented in a 10-block radius. I'd love to see all of them.

And when I go to New York City for a weekend, I can see five shows easily. For me, Passing Strange definitely has a place in that mix. But I know that I'm not the average New York City tourist. The average tourist sees one, maybe two shows. Obviously a show like Passing Strange, without a recognizable story or cast, is a much more difficult sell.

Look at the box office totals from last week. We live in a world where the Broadway revival of Grease plays to a higher capacity and has a higher average ticket price than the revival of Gypsy, which has three amazing, Tony-winning performances. How can that be?

I wish Passing Strange could have gotten some of the audience for rock 'n' roll musicals that went to see Spring Awakening or Rent. Maybe part of it was the marketing. Perhaps Daniel Breaker as Youth should have been featured more prominently. I mean, Stew's a great guy and all, and he does a great job acting as kind of a narrator for Passing Strange, but he's not the whole story. You want people to realize that this is a love story, a story about a young man's journey, a story about race and about family. I'm not sure any of those things came through unless you actually bought a ticket and went to see it.

Anyway, I'll be looking forward to Spike Lee's film of Passing Strange. And as I said in my review of Passing Strange, while I like musicals with big choreographed dance numbers, showstopping songs and lavish sets, it would be pretty boring if every musical were like that. I'm glad that there was something so unique on Broadway, and I loved seeing a show that challenged my expectations.
Posted by Esther at 3:34 PM