I have to admit, I've never heard of an idea for a musical that didn't pique my curiosity a little bit, especially when it combines something else I love - like small, heartwarming British movies based on real-life stories of quirky characters who put aside their differences to band together and overcome adversity. 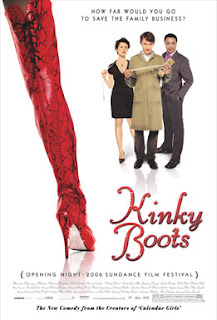 So, according to this article in Playbill, two Broadway producers have their eye on turning the 2005 British movie Kinky Boots into a musical. All right, I know what you're thinking: another proposal for turning a movie into a Broadway musical? Isn't that the hundred zillionth one so far this year? And we've still got six more months to go.

But I'm actually kind of intrigued that producers Daryl Roth (August: Osage County) and Hal Luftig (Movin' Out, Legally Blonde) are working on this project. Apparently, things are in a very early stage. They're looking for a book writer and a composer. Jerry Mitchell, the Tony-winning choreographer, and director of Legally Blonde, is in talks to direct. Although according to another Playbill article, Mitchell is working on Going Hollywood, a musical version of the 1930 comedy Once in a Lifetime that's planned for San Diego's Old Globe in 2010. So he's likely to be busy for quite some time.

I'm quite fond of this type of movie. You know what I mean: little slices of life that often take place in some rural village or gritty industrial town. There's a problem that needs solving or a big event that's taking place or some kind of crisis. Everyone bands together to save the factory or save the village or help out a mate in trouble or help someone realize their dream or win the competition or raise money for a worthy cause. Along the way, there's lots of opportunity for bonding and camaraderie as people realize an inner strength they never knew they had. And if there are accents and slang that are hard for American ears to decipher, so much the better.

Anyway, inspired, of course, by a true story, Kinky Boots tells the tale of a drag queen, played by Chiwetel Ejiofor, who helps revitalize a dying shoe factory in the British Midlands by coming up with an idea for footwear for performers in his line of work.

There's a great deal of warmth and humor in the movie, along with some dramatic twists and turns. The plot leads up to the big Milan Shoe Fair, where the new footwear will be unveiled. Ejiofor's character is sympathetic and well-drawn, not at all a stereotype. There are some other great characters, too, including the likable but hapless factory owner, who's thrust into the job after his father dies and is desperate to keep the family business afloat.

Roth and Luftig talk about the story's heart and humanity, and it is a very sweet, poignant story about an unlikely group of people who come together to help each other out. With a few tunes, it could translate well to the stage. (I mean, what couldn't be improved with the addition of a few tunes and some lively dance steps?)

"The story is really about relationships," Roth told the Hollywood Reporter, "and I want to find the heart at the center of it."
Posted by Esther at 1:01 AM

I LOVE all those movies but gasp, I still haven't seen Kinky Boots and the funny thing is two friends both told me I would like it just before I read about this news.

And look how Billy Elliot and Full Monty turned out as musicals! Maybe its the TYPE of movies that count when judging movie to musicals!

I think if you like the other movies on my list you'd like Kinky Boots. It's definitely cut from the same cloth. And I was thinking about the success of Billy Elliot and The Full Monty when I read the story. You'll have to rent the movie and let me know what you think.

It's hard to say why some movies succeed as musicals and others don't. I think this might be obvious, but for me, an important question is: Do I care about these characters? In Cry-Baby, for example, I didn't care all that much. But in Hairspray, I definitely cared. I think, if the producers get the right team together, Kinky Boots could have that same type of appeal. It's a very sweet story and without being preachy, it says some important things about accepting people for the way they are.

Chiwetel Ejiofor is supposed to be a terrific stage actor, btw. I hope he comes to Broadway soon.

Awww Calendar Girl and Mrs. Henderson - those are two of my favorites!!!! And Billy Elliot makes me weep every time I watch it. Oy.

I have yet to see Kinky Boots though, I'll add it to the list!

Hey, come to think of it, Calendar Girls and Mrs. Henderson might make pretty good musicals too! Of course, there already is some music in Mrs. Henderson. I'm sure if I'd spent more time on it, I could have come up with another 20 little British movies that I love. Another one is actually a film of a play. I love Meryl Streep in David Hare's Plenty. I'm not sure it could be musicalized though.