So I finally saw Slumdog Millionaire this afternoon. I was all prepared to wait for it to come out on dvd but my fellow bloggers Steve and Vance urged me to make the trip to the multiplex and watch it on the big screen. They were right. Thanks for the encouragement, guys! 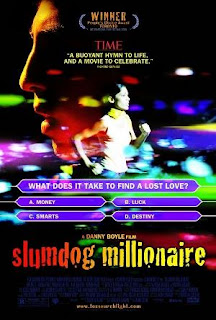 I've mentioned before that I'm very squeamish and I was afraid that some of the scenes I'd read about would be too hard to take. But while some parts of Danny Boyle's movie are horrific and the slums of Mumbai, India, are unbelievable in their poverty and vastness, Slumdog Millionaire is never unwatchable.

Just the opposite - I thought it was a compelling story, vivid and riveting, with characters who will totally touch your heart. I liked British actor Dev Patel, as a slum kid who's competing on the Indian version of Who Wants To Be A Millionaire? He's so appealing, low key and tenacious, with big dark eyes and - for some reason I was fixated on this - extremely cute ears.

The producers cast real slum kids to portray the main characters as children - Azharuddin Mohammed Ismail, Ayush Mahesh Khedekar and Rubiana Ali. They were on stage last week when Slumdog Millionaire won the Oscar for Best Picture and they're adorable.

The lives of these children that we see depicted on screen are so harsh and gut-wrenching. It's hard to watch them being exploited and living in conditions that no one should have to endure. It's hard to believe the government of India can't do more for them.

Since it won a total of eight Academy Awards, what's the next chapter in this story? Why, a musical of course. (Why doesn't anyone ever announce plans to turn a movie into a play? That's a rhetorical question. I think I know the answer.) The producers are planning to bring the movie to the stage to raise money for the slum children of Mumbai.

Of course there is a precedent. Remember Oliver! And Slumdog Millionaire is nothing if not Dickensian. Still, I wouldn't want anything that's too cutesy, that sugarcoats the lives of these children. It's a lot easier to take a musical about poor kids when the conditions depicted on stage are safely in the past.
Posted by Esther at 9:37 PM

I recently came across your blog and have been reading along. I thought I would leave my first comment. I don't know what to say except that I have enjoyed reading. Nice blog. I will keep visiting this blog very often.