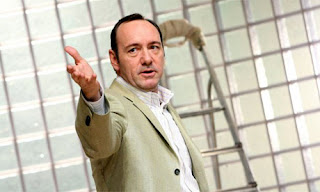 Okay, there isn't really a musical called Never Mind although maybe there should be - a compilation of all of those tuners that were announced but never got off the ground. Or if they did, it was with a cast far different from what we imagined.

For example, now I find out that Kevin Spacey isn't going to take part in a London workshop of A Star is Born that I wrote about last week.

The story in Britain's Daily Mail has dueling versions of what happened. A representative says Spacey never was involved. But the director, Jonathan Butterell, insists that he had been engaged to play the part of washed-up actor Norman Maine.

Instead of a reading at the Old Vic Theatre in the spring, there'll be one in New York City, with a different leading man. Warner Bros. is continuing to develop the show for Broadway but the Daily Mail says don't expect anything anytime soon.

This whole episode brings up another point. It's kind of tough to keep track of all of these proposed new musicals - who's in, who's out, what's still on, what's off. At least once a week someone announces that they're working on a musical version of something.

Sometimes we hear back, like a report this week by the New York Post's Michael Riedel about the good buzz emanating from an invitation-only reading of The Addams Family. Other times, there's the announcement and then - nothing. What's going on with Get Shorty and is Hugh Jackman really practicing his magic tricks for Houdini? I'd like to know, please.
Posted by Esther at 12:15 AM